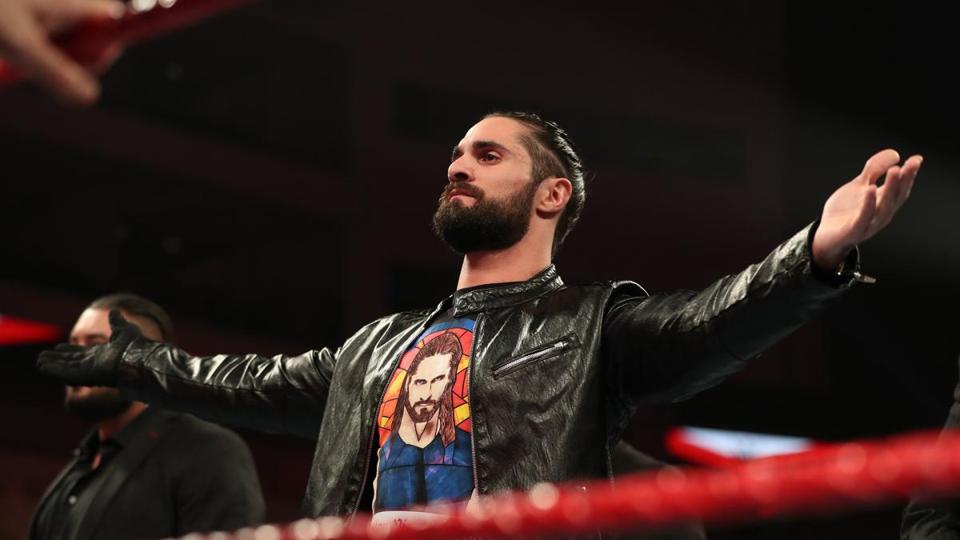 WWE Raw featured a main event between Drew McIntyre and the returning Andrade as Zelina Vega’s stable of Andrade, Austin Theory and Angel Garza were all over the show.

After a McIntyre win, Seth Rollins attacked the WWE champion to become his next contender.

Drew McIntyre claimed he wanted to face whoever is hungriest for his championship, but instead of conducting a poll or a survey, he just accepted a challenge from the first wrestler who stepped up.

Zelina Vega said most people don’t get to have two WrestleMania moments in one night, but at WrestleMania 21, Shelton Benjamin had like six.

Andrade is clearly wearing his WrestleMania gear after being forced out of WrestleMania 36 with a rib injury.

As Asuka hilariously danced to Ruby Riott’s theme song, Riott impressively held it together. She didn’t even come close to corpsing.

Ruby Riott trying to awaken “the real Asuka,” as she shouted during her trash talk, is an intriguing angle in and of itself.

If a WWE Performance Center recruit crashes the Money in the Bank match and grabs the briefcase, does WWE have to honor that as it did for Brock Lesnar?

Ruby Riott is one helluva talent.

One of the many downsides to coronavirus-era WWE is “local competitors” are now NXT talents.

Becky Lynch tried way too hard with this one.

This segment seemed designed for Becky Lynch to explain her actions weeks ago when she wore Jerry Lawler’s crown. Her explanation was something along the lines of “you can’t get close to the queen unless you’re a joker.”

There isn’t a bookie in Las Vegas who would take bets for this match. That’s how much Sarah Logan should be favored to win.

The announced decision of Sarah Logan winning this match was deemed a mistake.

As hard as these two worked, if this match were in a live arena, this would be the point where the match where the crowd hit a wall.

Next week: Austin Theory challenges Zelina Vega’s husband for a spot in the 2020 Money in the Bank Match.

This match will forever be known as the “Ramen Noodle Moonsault” Match.

If Zelina Vega gets 10% of her client’s salaries she has to be the highest-paid manager in wrestling.

A developing story is Seth Rollins slowly losing his mind, one segment at a time.

Zelina Vega has supplied at least half of the talent for tonight’s broadcast of WWE Raw.

I wonder whether or not Angel Garza is jealous that Zelina Vega didn’t stay for commentary during his match.

Does WWE at least have a name for this heel stable that is dominating the show?

Talking point to be done to death on wrestling podcasts tomorrow: “The babyfaces don’t have any friends!”

Kairi Sane deserves better, but WWE has to keep Nia Jax strong for her shoot fight with Ronda Rousey.

Actual sentence said by Tom Phillips: “…Kairi Sane, who does not have the size advantage…”

While watching backstage, Asuka was cheering on Kairi Sane as if she thought Kari could hear her.

There is probably somebody out there watching for the first time who is convinced that, based on his biased commentary, “The Queen” Charlotte Flair and Jerry “The King” Lawler are husband and wife.

Given Bobby Lashley’s recent slump, when No Way Jose’s music hit, I felt bad for Bobby before the bell even rang.

This marriage is deteriorating before our eyes. Bobby Lashley stole a page out of Chris Jericho’s playbook by asking Lana to “please shut the hell up.” He then stared her down as he pinned No Way Jose. The lawyers can’t be too far behind.

“They ride together, they fly together.” That was cute.

WWE could have cut five minutes out of its remaining two empty-arena matches and just have Jerry Lawler read his 10 favorite outraged comments on Twitter.

What a waste of a great tag team match.

Pre-Match Thoughts: Seth Rollins’ show-long promos will very likely lead to Rollins attacking Drew McIntyre, but he’ll have little to no chance at winning the WWE Championship in McIntyre’s first PPV defense (kinda). So Rollins is lamenting a big-match loss only to lose another big match if and when he takes on McIntyre.

WWE sure loves to pick and choose when NXT exists in canon. When an NXT talent debuts, there’s “not a lot of footage on them,” but when two wrestlers had a history in NXT, it’s a “rivalry renewed.”

It may have seemed repetitive but it was wise of WWE to put over Zelina Vega’s stable so much because now Andrade poses an even greater threat to Drew McIntyre.

History Tells Proration Would Cause Chaos In The Texas Oil Patch

Despite No NCAA March Madness, One Shining Moment...

The COVID-19 Coronavirus Is Now A Pandemic: What...

How To Stop Wasting Your Ad Budget