Breaking
Best Incentive To Get Vaccinated: Money, Messaging, Or...
Page Level Query Analysis at Scale with Google...
How A CIO Can Align IT With Business...
Blogger of the Month: Jo, Girl Eats World
6 Things Women In Business Know That Men...
How to Use First-Party Data for Ad Personalization
Pressing Reset—Putting A Fallen Unicorn Back On Its...
How We Went Viral: Promoting Content with Influencers,...
Blame Olympic Record Price Tag For Return To...
Apple iOS 14.5 Release: Should You Upgrade?
Why Gaming Gear Company Razer Launched A $50...
Technical SEO Implementations to Increase the Impact of...
30 Brilliant Ways to Market Your Eco-Friendly Shopify...
15 Tech Industry Leaders Share Overused (And Misused)...
How to Use Amazon Posts to Promote Your...
U.S. House Passes Bill To Create First Crypto...
Home Business WWE Raw Results: News, Notes After Buddy Murphy Joins Seth Rollins And AOP
Business 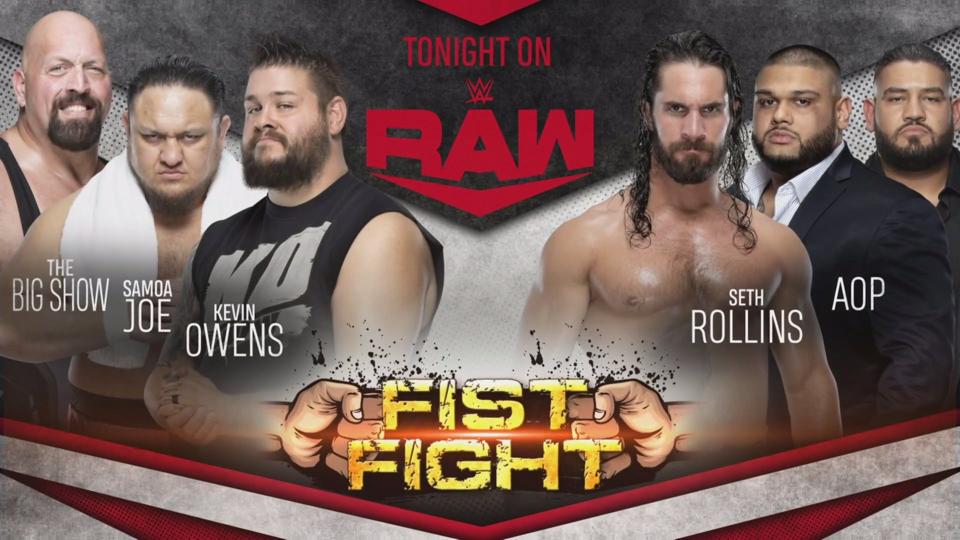 Seth Rollins and AOP defeated The Big Show and Samoa Joe in a Fist Fight with help from Buddy … [+] Murphy.

Last week’s broadcast of Raw drew 2.385 million viewers, which was down despite no competition from major sports. That will not be the tonight as Raw will go head-to-head with the College Football Playoff National Championship game. Raw’s viewership marks its highest number since September 30.

Boy does it seem like WWE is finally serious about a Drew McIntyre push.

This match felt designed to get fans to truly believe Drew McIntyre can win the Royal Rumble.

This marked one of the few times this year that Mojo Rawley’s theme music will play on television.

Vic Joseph asked Jerry Lawler if he wanted to switch his Royal Rumble pick from Drew McIntyre to Ricochet, and I have a fleeting feeling that Vince McMahon got in his ear and growled “don’t you dare!”

Remember that comment about Mojo Rawley’s theme music playing on television? I feel the exact same way about Sarah Logan.

Charlotte Flair putting on her robe after beating her opponent—and then throwing her out of the ring while wearing said robe—was a whole new level of disrespectful.

I feel strongly that Brock is getting eliminated super early in this Royal Rumble by an up-and-comer. Brock isn’t working a match for an hour, and If I know Paul Heyman like I think I do, Brock won’t last past No. 5.

The fact that Brock Lesnar didn’t even bother to pin R-Truth (who killed tonight) for the WWE 24/7 Championship tells you everything you need to know about that belt if you didn’t already.

What are the odds that Brock Lesnar thought he was in the ring with Kofi Kingston?

Mojo won the WWE 24/7 Championship, which I think he did to show me up.

WWE has spent endless time and resources, for better or worse, on this storyline but you would never know it by the crowd reaction to this one-on-one showdown.

The craziest thing about this Lana-Lashley union is they have to cut promos together every week and Lana runs circles around Lashley in that department.

Lana threw a refreshing drink in Liv Morgan’s face and Liv acted like it was Asuka’s green mist.

Are The Singh Bros. ever going to release all this footage their filming of them walking to the ring?

The Viking Raiders should really start vetting the pool of open challengers.

Kairi Sane poking Becky Lynch with her umbrella was hilarious.

Becky’s apprehension to even speak renders that punch she delivers from last week pointless.

Buddy Murphy might have the worst theme music in WWE.

Murphy and Aleister Black looked to the crowd before locking up to build anticipation, and the crowd was like “don’t look at us, we can’t help you.”

Eventually, fans gave this match the “this is awesome” chants Murphy and Black were looking for before it started.

This masterpiece was somewhat marred by a phantom two count where the referee thought Murphy’s shoulder was up. The announcers played it like it was intentional, but Black did not look happy about it. To be fair, he never looks happy.

Buddy Murphy was the rare case of a WWE Superstar who actually sold the fact that he was dejected after a loss. He was solemnly seated next to the barricade throughout this match and he may never leave.

Erick Rowan’s creature bit him when he tried to touch it. If it enters the Royal Rumble it may be impossible to grab it and throw it out of the ring with both feet touching the floor.

Seth Rollins and AOP vs. Samoa Joe and The Big Show

This Fist Fight is basically Parkour and tables. Awesome.

Wait, is Buddy Murphy’s storyline intertwining with a main event angle? I don’t think I’ve seen stories intertwine in #WWE since the ’90s!

Steph Korey, And The Challenge Of Accountable Leadership