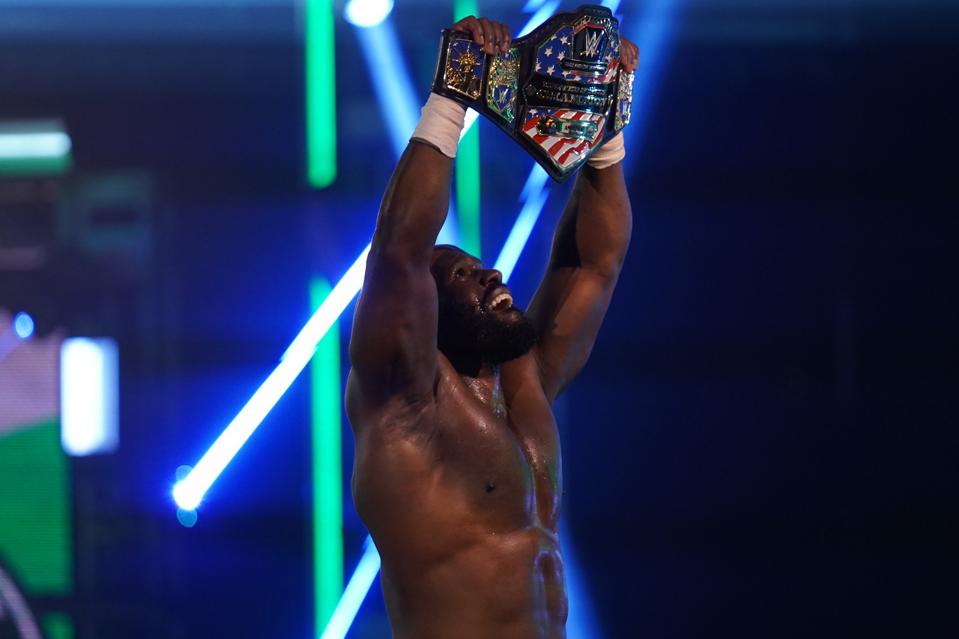 WWE Raw featured its first show of the pandemic era to showcase a live crowd as athletes from the WWE Performance Center were used as essential-staff audience. Last week, WWE issued a survey to fans, polling them as to how they’d feel to see people in the crowd. WWE noted the athletes were tested and also used plexiglass as a safety measure as the worldwide leader borrowed an idea from AEW and completely blew it away.

WWE’s crowd seemed like an actual crowd that was invested in the storylines, cheering the babyfaces and booing the heels. Fun as AEW’s essential staff audience has been, it’s filled with regular AEW talent that sometimes falls into the bad habit of being too cool for the room.

The big news out of WWE Raw was Apollo Crews winning his first championship in WWE in a rare batch of black excellence for the company. Raw also revealed huge news late as WWE teased a Rey Mysterio retirement storyline following a (kayfabe) eye injury at the hands of Seth Rollins. This which will all but likely be part of an angle resulting in a match against Rollins at Backlash.

Despite announcing a Brand-to-Brand Invitational for last week’s broadcast of WWE Raw, it garnered 1.757 million viewers. This was a near-record low and down 8.4% from Raw’s one-month high for Becky Lynch’s pregnancy announcement.

Just the notion of simple applause added so much life to what has been a dim atmosphere.

Through all these plants in the crowd, we’re able to see who WWE views as babyfaces and heels. During her entrance, Charlotte was definitely being presented like a babyface. Then she made a remark about beating Asuka and got booed for it. Whether Charlotte is a babyface or not is still unknown.

Kevin Owens is getting very good at hosting from the apron.

WWE is outclassing AEW in presenting a coordinated, live crowd that gets across who the good and bad guys are. It’s been 23 minutes and I haven’t heard a single inside-baseball wrestling reference shouted out from the workers in the peanut gallery. Plexiglass a plus.

As the miscommunication between Zelina and Friends continues, she’s in danger of having zero clients by the end of the month.

Apollo Crews winning the United States Championship felt like the first great moment of the live-crowd era that doesn’t even exist yet.

Apollo Crews said it took him 11 years for him to finally win a championship in WWE. I’m noticing a pattern.

Every time an African-American performer wins a championship in this company, it feels like Jackie Robinson hit a single. Sad as that is, it’s good to see Apollo Crews get on base.

The IIconics Face Off with Alexa Bliss and Nikki Cross

Until further notice, I’ll be nervous every time I see the IIconics, fearing WWE will foolishly pull the trigger on a split.

“You just need to stand there, and just look grateful,” said Billie Kay to Nikki Cross. That was a bar.

Nikki Cross and The IIconics fighting over who had the tougher road from Europe to WWE was fascinating colonial drama I didn’t know I needed.

Every wrestling announcer, at some point in their career, Stans somebody. J.R. for Austin; Corey Graves for Mandy Rose; Vince McMahon for HBK; Heenan for Goldberg; Schiavone for Sting. Samoa Joe has chosen to Stan The IIconics and it has so much potential.

If Lashley beats Drew McIntyre for the WWE Championship (he won’t), it would have been a 13-year journey.

MVP is on pace for taking the most Claymore Kicks in all of WWE and he’s not even a full-time performer.

I cannot emphasize how great it is to have a live crowd.

Poor Zelina is the most ubiquitous person in this pandemic but had so little to show for it with her entire squad either losing or getting beaten up by his colleagues in the last two weeks. That is, until Angel Garza came along and shocked Kevin Owens.

Zelina Vega should ride these waves and sign whomever SmackDown traded for AJ Styles.

The Street Profits def. The Viking Raiders in Golf

The coolest part of this segment were the logos for the Street Profits and Viking Raiders.

Don’t forget, all this tomfoolery will eventually lead to a wrestling match which all things considered should be pretty damn good.

If WWE wants anybody to care about any potential feud between Murphy and Austin Theory, these two need to be together and succeed as a tag team over a course of weeks, at the very least.

It’s crazy to see Shotzi Blackheart just standing in the crowd knowing she’ll be #NXT’s biggest star inside of a year.

As long as Seth Rollins, Murphy and Austin Theory are around, nobody’s eyes are safe.

We’re almost halfway through 2020 and the Announcer of the Year award in wrestling is a dead heat between Chris Jericho and Asuka. I’m being 100% serious.

The problem with Asuka on commentary is I cared very little about the match and more about what she had to say (or, more accurately, how she was going to say it). Perhaps the announcers spending much of the match setting up Asuka for her Japanese-language rants was to blame.

Asuka switched horses a couple times while cheering on these women.

I made the mistake of thinking Ric Flair would be appearing live and was very disappointed by an otherwise passable Ric Flair promo.

The only way this will be the greatest match of all time is if Flair does the commentary by himself.

Montez Ford continues to incorporate The Rock in his promos and matches, making me think he’s angling for what would be the most charismatic matchup in WWE history.

Kayla Braxton asking why MVP would compete after taking a Claymore Kick is one of countless examples of WWE going above and beyond to put over McIntyre as a top babyface. I’m very confident it will pay off when fans come back.

MVP got much more ring time (and took more bumps) than I would have ever imagined in a match like this. Such has been the story of a resurgent MVP during the pandemic.

WWE Attempts To Rename A City In Kentucky...

How To Keep Your Working Hours In Check...

Investing in Yourself and Your Team to Grow...