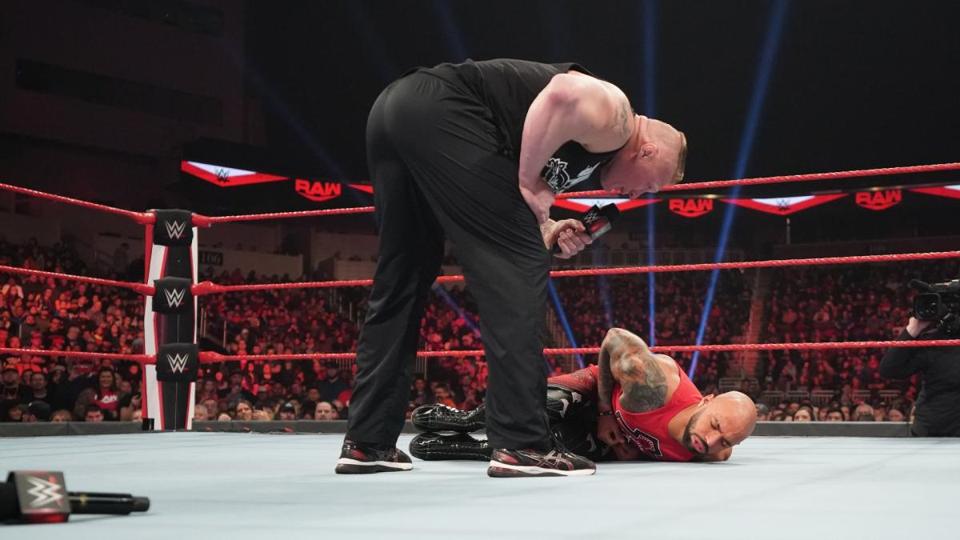 WWE Super ShowDown 2020 is a chance for WWE to do the right thing with Roman Reigns, Brock Lesnar, … [+] Bray Wyatt, Goldberg and more. How should the PPV be booked?

WWE Super ShowDown 2020 will mark WWE’s latest special event from Saudi Arabia, and the company is pulling out all the stops with a top heavy card that is headlined by Bray Wyatt vs. Goldberg for the Universal title and Brock Lesnar vs. Ricochet for the WWE Championship.

The Saudi Arabian shows have been huge moneymakers for WWE and have typically relied heavily on the presence of part-time stars, as is the case this year when Lesnar and Goldberg will challenge for world titles in the show’s two biggest matches. There is a little more pressure on WWE to deliver a quality show this time around, however, as 2020 will mark the first year that WWE hosts an event in Saudi Arabia right before WrestleMania rather than just after the pay-per-view. It remains to be seen which stars on the show will be involved in marquee matches at WrestleMania 36 itself, but regardless, Super ShowDown will still play a major role in determining the immediate creative direction for many of WWE’s biggest stars, especially with reports indicating that several big Mania matches are now up in the air.

With the WWE and Universal titles on the line, as well as notable bouts for stars like Roman Reigns and Bayley, this isn’t just any throwaway overseas show that WWE can book like a glorified show. As WWE’s TV viewership for both Raw and SmackDown continues to remain consistently mediocre, if not downright disappointing, even despite the presence of those aforementioned part-time stars, WWE needs to deliver a well-booked show in Saudi Arabia. 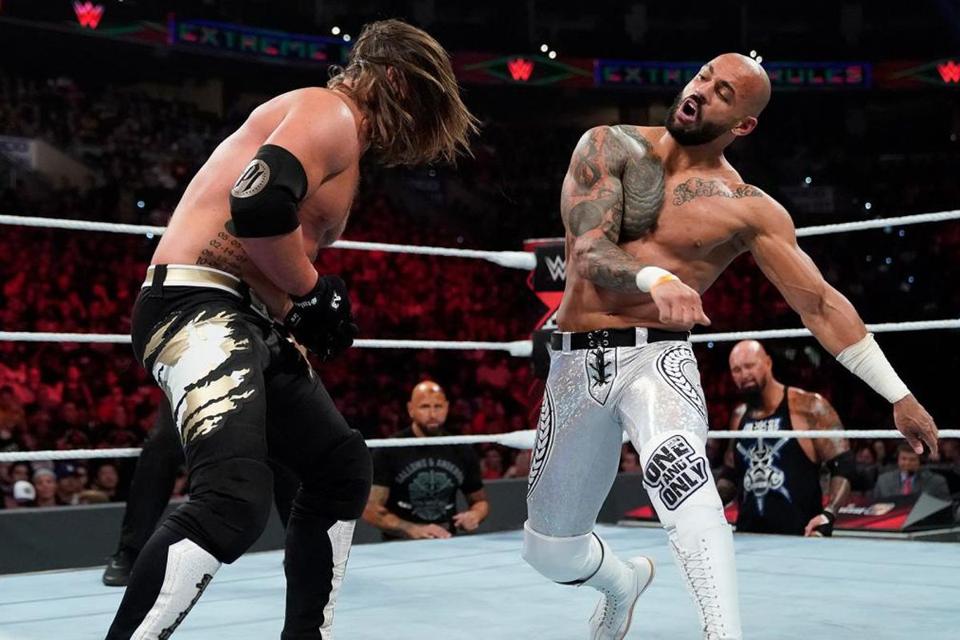 WWE will host a six-man gauntlet match for the Tuwaiq Trophy at Super ShowDown, and the fact that only a trophy is at stake could very well mean that the outcome of this bout ultimately won’t mean much.

If there is one star who really needed to win this match, it was Rusev. Nearly two years after he first requested to be released, “The Bulgarian Brute” was recently removed from WWE TV (and quickly brought back) amid a messy contract dispute with the company, which has reportedly made re-signing the talented star a “top priority” in recent months. But after Rusev reportedly informed WWE he would not be making the trip and was replaced by Rey Mysterio as his future in WWE continues to look glum, AJ Styles is now the clear and logical frontrunner to win the match.

“The Phenomenal One” will reportedly be facing the legendary Undertaker at WrestleMania 36, and that match will be pushed as one of the biggest matches at WWE’s flagship event. Styles hasn’t really been booked all that well in recent months, though, so it’s imperative that he build up some much needed momentum with a win in a gauntlet match that doesn’t serve much of a purpose outside of potentially igniting a big push for whoever wins it. WWE has previously dropped the ball in that regard with its gimmick matches in Saudi Arabia, but this is one opportunity it can’t miss.

Styles must win the gauntlet match in impressive fashion to make him look more credible for his match against Undertaker after he’s lost some steam due to his association with the poorly booked OC.

Roman Reigns Beats Baron Corbin And Moves On For Good 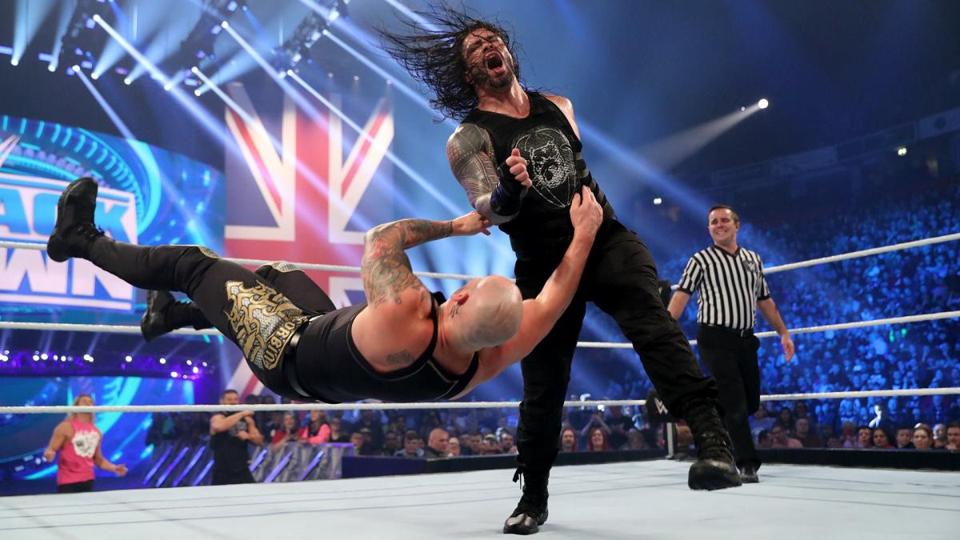 WWE needs to move on from the Roman Reigns vs. Baron Corbin feud.

For all of the criticism that the Baron Corbin vs. Roman Reigns feud has gotten, one thing it has accomplished is ensuring that Reigns, one of the most polarizing figures in WWE history, is now almost universally cheered.

But enough is enough, and with WrestleMania 36 rapidly approaching, it’s time for Reigns to move on from Corbin by defeating the man formerly known as “The Lone Wolf” in resounding fashion at Super ShowDown. Reigns was at one point reportedly set to face Bray Wyatt for the Universal title at WrestleMania 36, and though those plans may have changed, there is no real reason why Reigns should lose or why his seemingly never-ending feud with Corbin should continue past Super ShowDown, especially with a potentially even bigger Mania match against Goldberg waiting for “The Big Dog.”

Reigns needs to get past this lackluster rivalry that has been downright boring over the past couple of months and that hasn’t really portrayed anyone involved in it in a more positive light. One could argue that SmackDown’s struggles to improve its viewing audience and its inability to create compelling stories have stemmed largely from the heavy focus on this lackluster Reigns/Corbin rivalry.

At Super ShowDown, it’s time to end it once and for all. 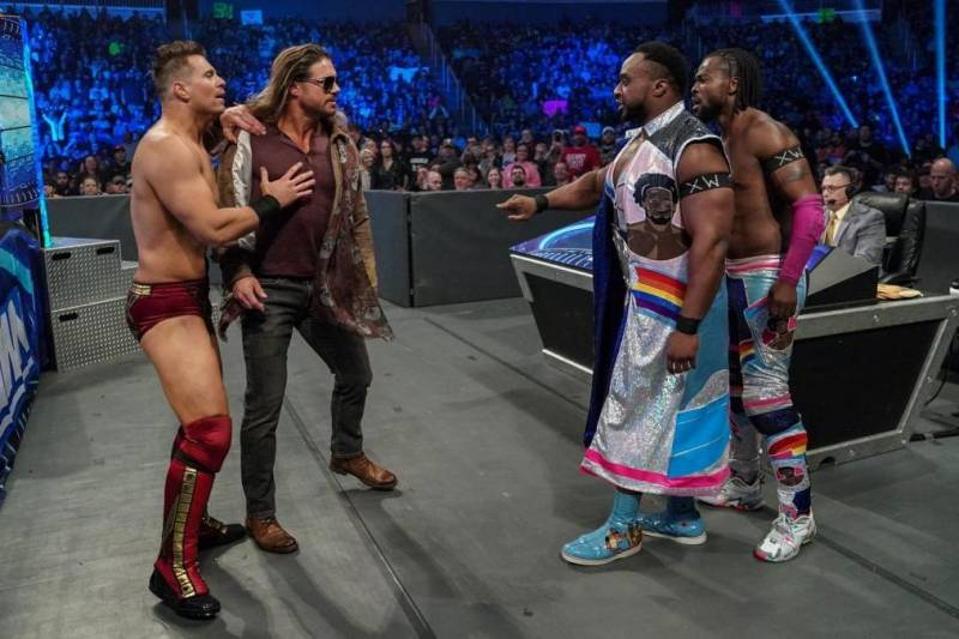 All-time great tag team performers like The Young Bucks and Edge have made it clear that Vince McMahon doesn’t like tag team wrestling because he thinks it doesn’t draw any money while The Revival has even rejected multiple lucrative contract offers because of McMahon’s dislike of the tag team division.

Yet, at Super ShowDown, WWE will host two big tag team title matches, with Seth Rollins and Murphy defending their Raw Tag Team Championship against The Street Profits while The New Day will put their SmackDown titles on the line against The Miz and John Morrison. In both of these scenarios, it sure feels like the right time for a title change. Murphy and Rollins are really nothing more than a short-term pairing in the tag team division, as Rollins appears to be on track for a bigger singles match at WrestleMania 36, likely against Kevin Owens. The Miz and Morrison, meanwhile, have been booked very well since reuniting and shouldn’t see their momentum halted by a loss to The New Day.

Despite McMahon not being a fan of tag team wrestling, there are a ton of fantastic pairings currently on the main roster, and WWE would be making the most out of them by putting its titles on the wildly popular Street Profits and the strong heel duo of Miz and Morrison. Those two moves could rejuvenate the consistently stale tag team division and provide WWE with the opportunity to move forward with Rollins/Owens in singles action while also laying the groundwork for marquee tag title matches on “The Grandest Stage of Them All.” 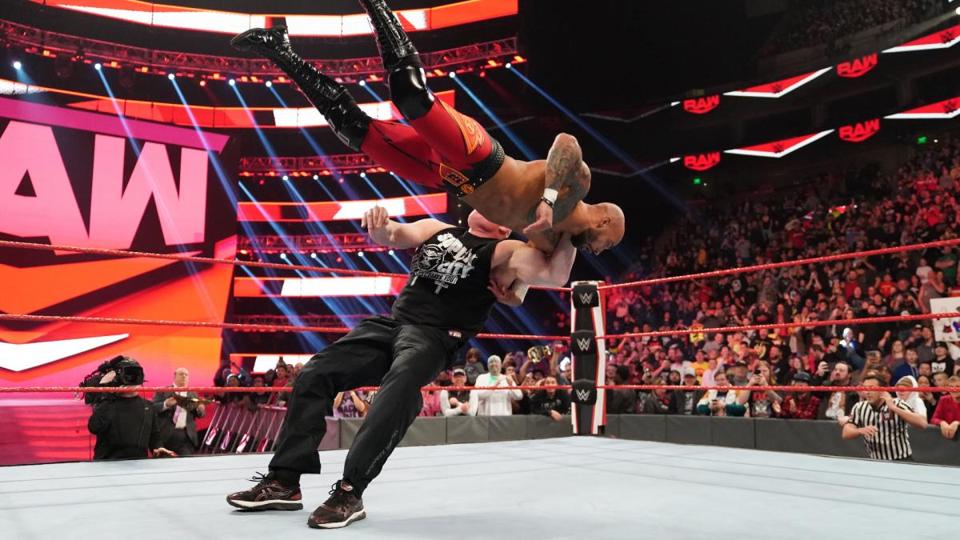 WWE doesn’t need to book a long match between Brock Lesnar and Ricochet at Super Showdown 2020.

WWE fans typically don’t advocate for a part-time star, whether Lesnar or someone else, squashing a full-time talent, but Lesnar vs. Ricochet is one of those scenarios in which that outcome makes the most sense.

Lesnar vs. Drew McIntyre is still the plan for WrestleMania 36, and it it may be the show’s actual main event as Vince McMahon is said to be a huge supporter of McIntyre with plans for him to dethrone Lesnar at Mania. Over the past few months, WWE has done a stellar job of booking both Lesnar and McIntyre to be downright unstoppable, with McIntyre easily disposing of anyone in his path and Lesnar eliminating almost half of the Royal Rumble field all by himself. Despite the myriad of problems WWE’s creative team has had in recent years, it’s hard not to be impressed by how well Lesnar and McIntyre have been booked.

Both stars have looked incredibly dominant as of late, and they’re on a collision course for a memorable fight at WrestleMania that could really elevate McIntyre to new heights if done right. What’s unfortunate for any star who crosses paths with either McIntyre or Lesnar in the coming weeks is that they won’t stand much of a chance of looking like an equal to either star, but the reality is that that’s a necessary booking move that will ultimately make the expected WrestleMania main event mean more than it would otherwise.

So, apologies to Ricochet, who has the potential to be a big draw among younger fans. But his role at Super ShowDown is to be easily and soundly defeated by Lesnar so that “The Beast”looks unbeatable heading into Mania.

Goldberg Does The Honors For Bray Wyatt 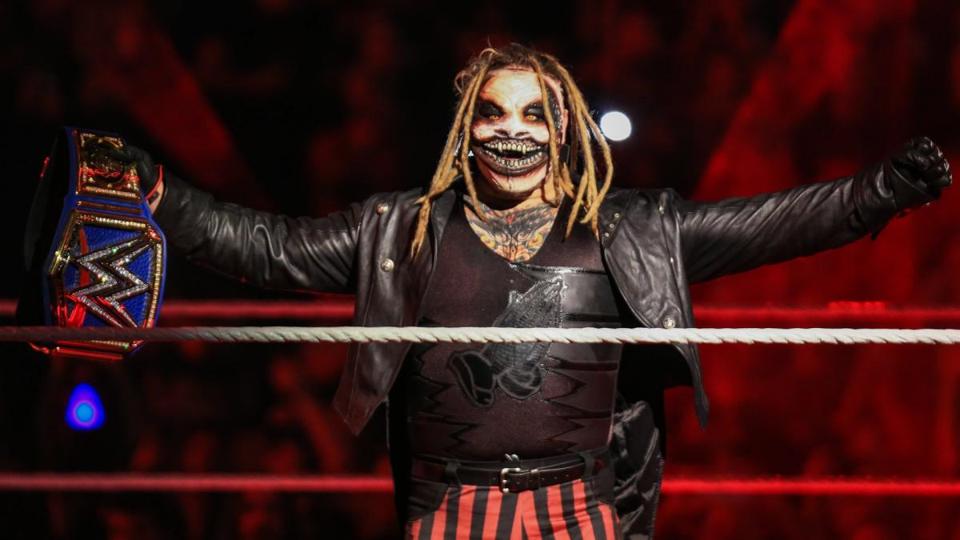 If his Super ShowDown 2019 payday is any indication, Goldberg will be getting a $2 million-plus check for his one-off match against Bray Wyatt at Super Showdown 2020.

In pro wrestling, that’s the type of monstrous payday that could make any star be willing to put someone over, no matter what type of impact that may have on his legacy as one of the most unbeatable superstars of all-time. At last year’s Super ShowDown, Goldberg did the honors for The Undertaker in what was one of the most universally panned main events in WWE history, and that’s precisely what he should do this year when he faces Wyatt, who could benefit tremendously from a win over someone like Goldberg.

Despite whispers of Goldberg potentially winning the Universal title to set up a match with Reigns and despite reports indicating that Wyatt vs. Reigns is now off the cards, there is no logical reason as to why Goldberg—at this stage of his career—should be doing anything but losing to WWE’s current generation of stars, no matter how much money WWE is paying him for his brief return or what type of ratings he generates. Goldberg’s lackluster performance against “The Deadman” at last year’s Super Showdown event shows that the WWE Hall of Famer doesn’t need to have drawn-out matches or extended runs with WWE or a world title. That’s not his role anymore.

Goldberg should be there to lose to Wyatt, quickly and soundly. Nothing less, nothing more.

CDC Guide For Facial Hair: How Do 36 Styles Work With A Respirator

Is It The Right Time To Buy Raytheon...

United NYC Half Marathon Canceled Because Of Coronavirus,...

Should Brands Should Stay Away From Using “OK...