Breaking
Why Getting On TV Is Your Best Marketing...
Ask Larry: Can I Take My Social Security’s...
Students Can Get Hulu For Just $1.99 Per...
Documentary Calls Out Stereotypes, Issues Urgent Call-To-Action For...
The Best Preferred Stocks For 2021
China’s Rare Earths ‘Slump’ A Sign Of Domestic...
5 Ways To Promote Team Wellness This Winter
How To Refresh Your Business Ideas In The...
Yelp Is Now Accepting Covid-19 Safety Reviews …And...
What You Should Consider Before Entering An Intrafamily...
The Hidden Drag From The S&P 500 That...
The Flawed Inflation Narrative; And “V” vs. “U”
How, When And Where You Can See A...
Why You Should Stop Using Your Facebook Messenger...
IRS Collections Appears To Be Broken
Google Search Rival DuckDuckGo Tops 100 Million Daily...
Home Business WWE Super ShowDown 2020: Goldberg Defeating Bray Wyatt And 5 Potentially Huge Surprises
Business 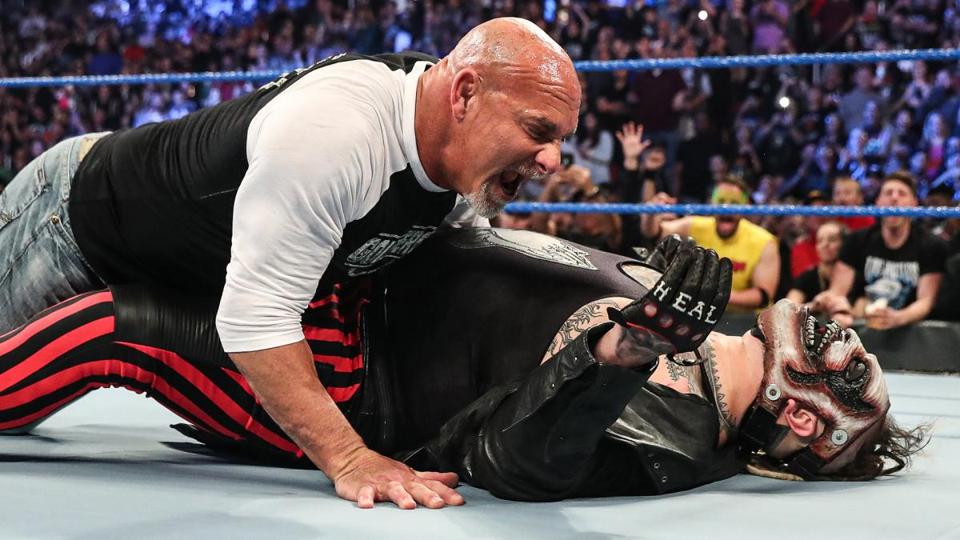 WWE Super ShowDown 2020 is—as has been the case with previous Saudi Arabia shows—quite the star-studded fair, one that is headlined by major matches like Goldberg vs. Bray Wyatt for the Universal Championship and Brock Lesnar vs. Ricochet for the WWE title.

Fresh off a very good Royal Rumble pay-per-view, WWE is looking to keep its creative momentum going with a well-booked Super ShowDown event, especially in the light of the company’s declining business. In addition to a major corporate shakeup in which Vince McMahon fired WWE’s two co-presidents, the company’s Q4 2019 earnings were wildly disappointing while its stock price has taken a huge tumble over the past month as well. That has put even more pressure on WWE to deliver a quality product and to bring in stars who can move the needle, which explains why names like Goldberg (whose SmackDown return was a massive viewership hit) and Lesnar are wrestling at Super ShowDown.

Over the past two years, WWE’s Saudi Arabian special events have largely been glorified house shows that are memorable and controversial for all the wrong reasons, but this year’s Super ShowDown event is slightly different. Why? Instead of taking place after WrestleMania, it’s taking place on the road to WrestleMania, which means that the happenings in Saudi Arabia could have a major effect on what matches we see at WrestleMania 36 just over a month from now.

With that being the case, expect WWE to pull off a handful of surprises in Saudi Arabia. Here are five potentially huge shockers we could see at Super ShowDown 2020.

Sasha Banks Returns And Ignites A Feud With Bayley 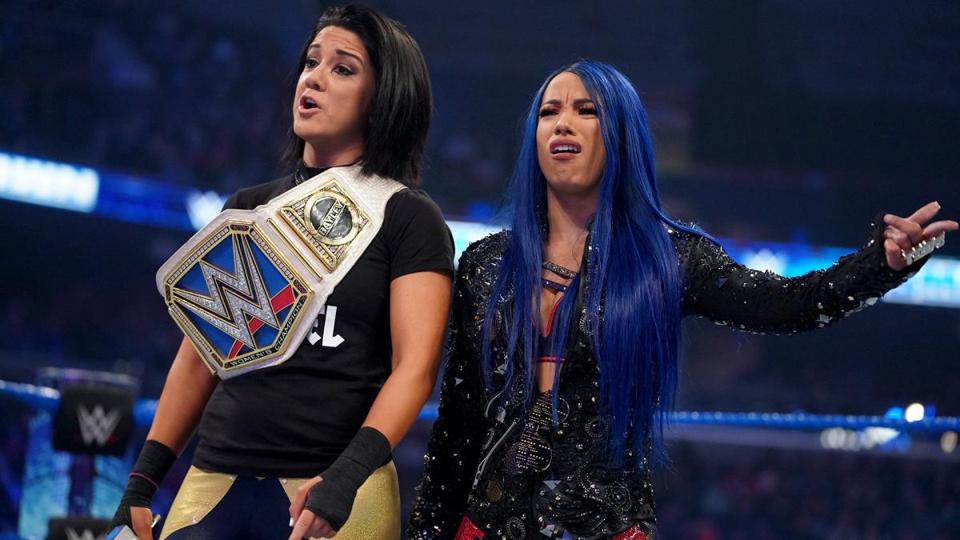 WWE could do Sasha Banks vs. Bayley at WrestleMania 36.

Sasha Banks is currently out with an injured back, and though there has been no definitive timetable for her return, “The Boss” has been linked to a potentially huge return feud.

One report says that WWE has penciled in Banks vs. Bayley for the SmackDown Women’s Championship at WrestleMania 36, a match that certainly makes sense given the lack of other options for Bayley on SmackDown. While it might be a bit premature to split Bayley and Banks at this point, the struggles of Lacey Evans to get over as a babyface—combined with the lack of consistent pushes for fellow faces like Naomi and Carmella—has really limited the number of possible WrestleMania foes for Bayley, who has dominated the SmackDown Women’s title picture for the better part of a year.

Banks vs. Bayley is the one potential women’s division feud on SmackDown that feels like a true WrestleMania caliber rivalry, and with Banks’ ongoing hiatus and Bayley’s expected WrestleMania match Naomi instead taking place at Super ShowDown, the stage is set for WWE to finally kick-start that highly anticipated Banks/Bayley rivalry in Saudi Arabia.

A surprising Super ShowDown return for Banks could set the stage for that dream match, though it would have to be done in a way that ensures Bayley keeps the title. 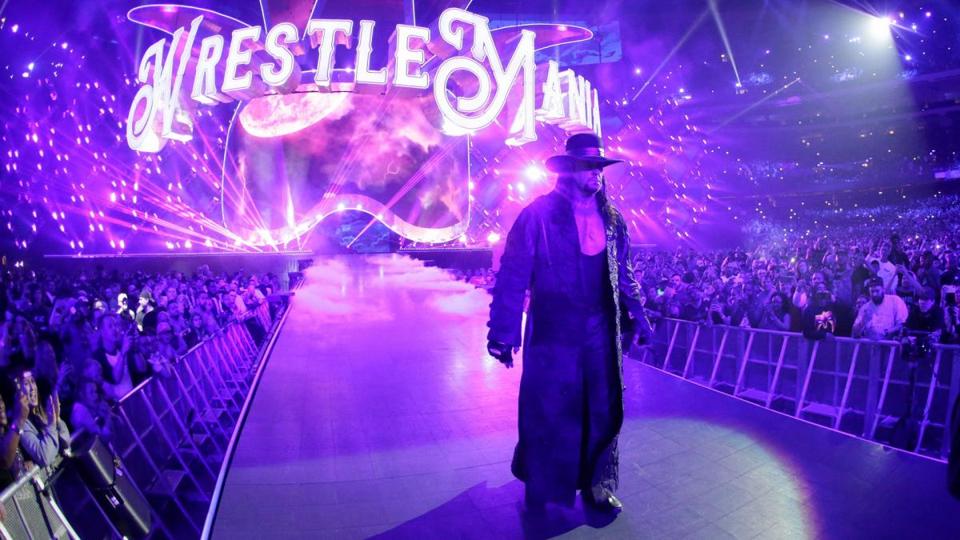 The Undertaker will reportedly have a marquee match at WWE WrestleMania 36.

After much speculation, The Undertaker will reportedly be returning to the ring at WrestleMania 36 for a blockbuster dream match against AJ Styles.

Though that match is happening at least a few years too late, WWE is undoubtedly hoping that the attraction of the first-ever bout between “The Phenomenal One” and “The Phenom” will be a substantial draw for its flagship pay-per-view. Especially with WWE losing WWE Network subscribers at an alarmingly rapid pace, it is matches like this that will be held in order to metaphorically stop the bleeding and ensure that fans remain interested in WWE’s sometimes stale product.

WWE needs to ensure that its Saudi Arabian events—which up until this point have largely been nothing to write home about—feature matches and storyline happenings that give fans a reason to tune in and that lay the foundation for future feuds. It doesn’t get much bigger than Styles vs. Taker, and WWE could start off this dream rivalry with a bang by having “The Deadman” show up unannounced in Saudi Arabia, especially given reports that Taker will be there (which were later confirmed by WWE) and that he could potentially appear on the show.

Imagine this: Styles wins the gauntlet match only to be shocked by an appearance by the most captivating superstar in WWE history, who lays him out with a chokeslam and a tombstone piledriver. Sounds like a great way to kick-start a dream match that is years in the making. 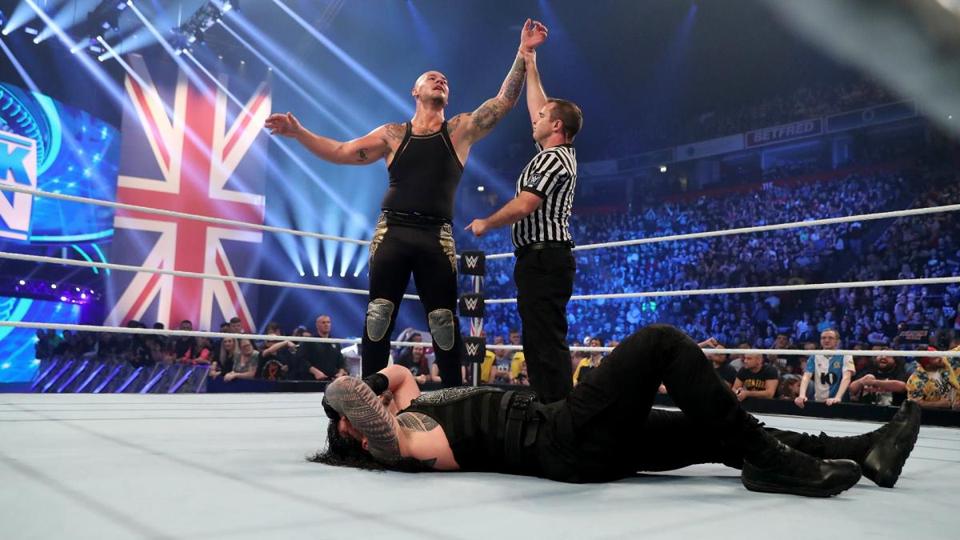 The prevailing thought is that Roman Reigns will easily defeat Baron Corbin at Super ShowDown to set up his expected WrestleMania 36 title match against Bray Wyatt.

But there have been at least two occasions—at TLC 2019 and on an episode of SmackDown in 2019—when Corbin surprisingly beat Reigns, making it far from a lock that “The Big Dog” will defeat Corbin in Saudi Arabia even though that’s clearly the most logical outcome. Consider this: WWE advertisements suggest that this feud could continue because both stars are set to compete in the Elimination Chamber match at next month’s pay-per-view. That means that, as has happened twice in the recent past, Corbin could very easily pull off the upset win to stretch out that feud a little longer, as frustrating as that might be.

Especially with Corbin still being associated with Dolph Ziggler and Robert Roode (while outside interference in steel cage matches is remarkably more common than it should be), there are all sorts of circumstances that could lead to Reigns losing his match against Corbin without losing his momentum. With WWE badly wanting to ensure that Reigns continues to be cheered, having him lose to Corbin again in controversial fashion is an easy way to get him that babyface sympathy and potentially set the stage for him to eliminate Corbin from the Elimination Chamber match.

That’s an easy story to write and one that WWE might deem to be a better one than Reigns dismantling Corbin in Saudi Arabia.

The New Day Starts To Unravel 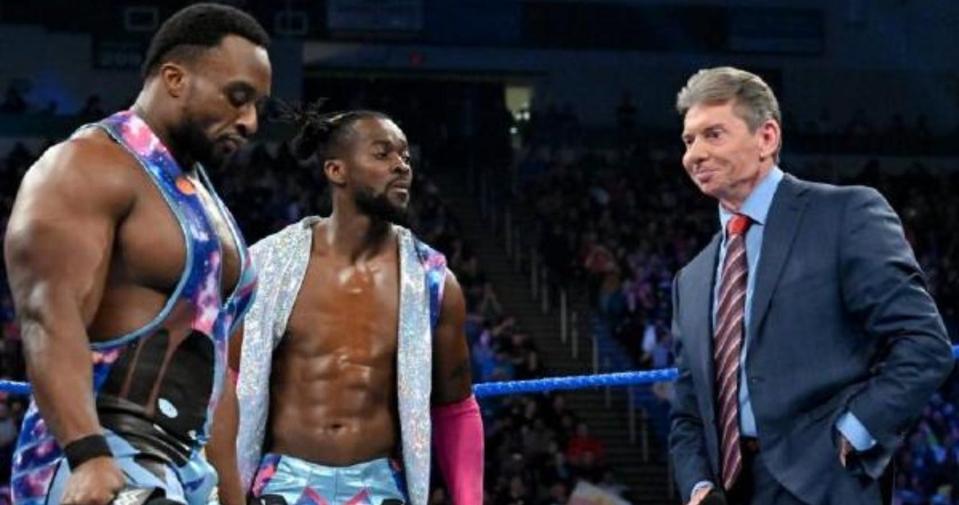 WWE has exhausted all options with The New Day.

The New Day will defend the SmackDown Tag Team Championship against The Miz and John Morrison at Super ShowDown, which sure feels like the right time for a title change.

While The New Day remains as popular as it always is, the duo of Kofi Kingston and Big E has really gotten stale in recent months, when its weaknesses have shown through during the absence of Xavier Woods. Though there is nothing inherently wrong with the way The New Day is featured, the talented trio has largely been doing the same old babyface shtick for the past five years, and a change of pace is needed. There were rumblings late last year that, with Woods sidelined long-term, WWE was considering a New Day heel turn that really could have reinvigorated the trio before ultimately deciding against it due to their strong merchandise sales.

Given that all three New Day members signed the exact same contract last year as a “show of solidarity,” it’s extremely unlikely that the trio will break up anytime soon, and truth be told, it shouldn’t. But with The New Day really getting all it can out of its current babyface run and rumblings of a potential heel turn remaining, perhaps WWE could use a loss to The Miz and Morrison in order to begin putting chinks in The New Day’s armor.

That would allow for some much needed character development for The New Day and a more exciting storyline on a SmackDown brand that badly needs it. 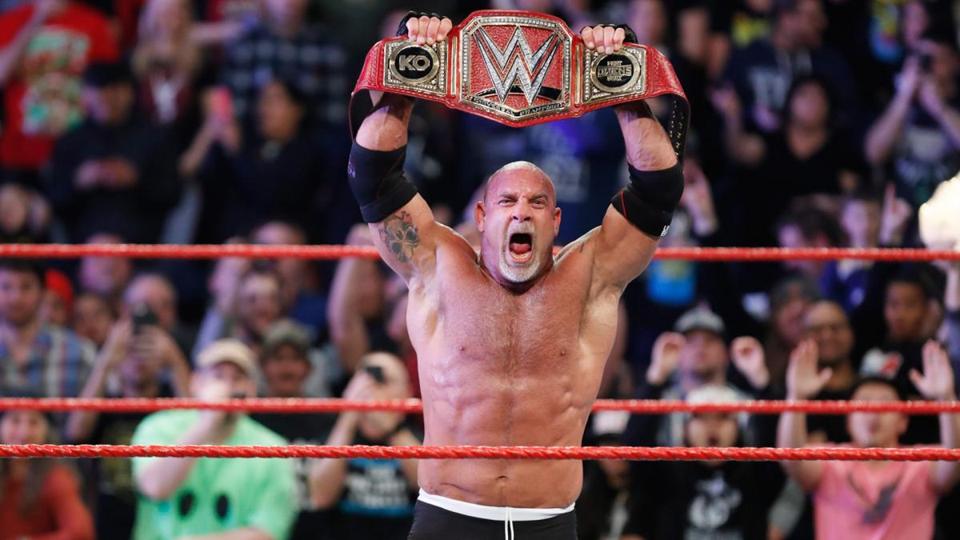 WWE could choose to put the Universal title on Goldberg at Super ShowDown 2020.

WWE reportedly paid Goldberg a staggering $2 million for his Super Showdown 2019 match against The Undertaker, a bout that was an absolute disaster and one of the worst main events in WWE history.

But WWE has no problem shelling out massive paydays for Goldberg and other part-time stars nowadays, and the WWE Hall of Famer is wrestling once again at Super ShowDown, this time for a blockbuster match against Bray Wyatt with the Universal Championship on the line. Goldberg has spent much of his career dominating his opponents and has been perhaps the most pushed and protected star in pro wrestling history, having never lost a match in truly clean fashion until he lost to Brock Lesnar at WrestleMania 33 in 2017. Since then, Goldberg lost to Taker at Super Showdown and then demolished Dolph Ziggler at SummerSlam, so which outcome is more likely at Super Showdown this year?

Well, Goldberg’s best days in the ring—which were never that great to begin with—are clearly behind him, and he’s been brought in as a special attraction, which has paid off as he has been drawing in significantly more viewers to SmackDown. Goldberg’s match against Wyatt can be considered a dream match of sorts, but unless there are plans to give him another extended run, then there is no reason why he needs to win at Super Showdown. In fact, he doesn’t need to have a long match, either.

Goldberg should do the honors in quick fashion both in order to mask his limitations in the ring and to help Wyatt look strong in anticipation of a likely WrestleMania match against Reigns. But there has been mounting speculation that Goldberg could actually win the Universal title to set up a WrestleMania dream match with Reigns instead, and though that would be an awful booking decision, this is WWE—so something like that is always a possibility.

In fact, a new report says that most of SmackDown’s Mania matches are up in the air and that Goldberg could leave Super ShowDown as Universal Champion. Brace yourselves.