Breaking
How To Use Content To Draw Others To...
Apple Loop: New iPhone 13 Leaks, Apple’s App...
25 of the Best Add-On Slack Apps to...
How to Resolve Duplicate Content
How Millennials Are Changing The Face Of B2B...
Bloggers of the Month: Kelly Jackson & It’s...
As Bitcoin Suddenly Surges Over $50,000, The Price...
In The Race To Retail Dominance, Customer Service...
Meet Onesimus, The Enslaved Man Who Saved Boston...
How to Build a Sales Forecast Model
The Unexpected Ways COVID-19 Has Forever Changed What...
Google Posts: Conversion Factor — Not Ranking Factor
How To Bring Your Branding To Life
Coinbase Cofounders And Investors Poised To Rake In...
How To Stay Top-of-Mind For Your Audience With...
Introducing The Chrome Extension: Get Share Counts, Links...
Home Sport WWE Survivor Series 2019 Results: Rhea Ripley Steals The Show, But Women’s Wrestling Remains An Afterthought
Sport 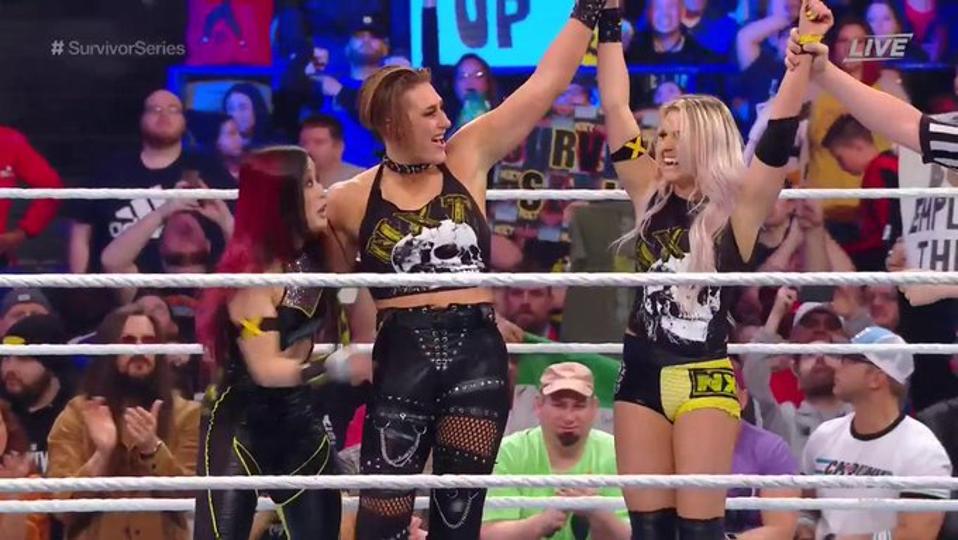 WWE Survivor Series 2019 continued the impressive run of Rhea Ripley, but should fans be worried … [+] about the overlooked women’s division?

WWE’s women’s division has gone from being the highlight of late 2018 and early 2019 to being a complete afterthought in the second half of the year, and even a strong showing at Survivor Series might not change that.

Although the lead-up to the highly anticipated triple threat match pitting Raw’s Becky Lynch against SmackDown’s Bayley and NXT’s Shayna Baszler was very good, the creative team put very little effort into building up the 5-on-5-on-5 women’s Survivor Series match, instead doing what it typically does and throwing a bunch of female superstars into a match and hoping it sticks. The match itself was very good, and WWE made a smart decision when Rhea Ripley–and technically Io Shirai and Candie LeRare–capped off an unforgettable week by picking the win for Team NXT.

But the utter lack of effort put into the buildup to the match was really a microcosm of all of the issues that have plagued WWE’s women’s division this year.

While it was just seven months ago that Lynch, Ronda Rousey and Charlotte Flair became the first women to ever main event a WrestleMania, it feels like that was eons ago. The post-WrestleMania absence of Rousey–considered by many to be the biggest draw in all of WWE–has caused the women’s division to lose its spark while the lengthy hiatus of Sasha Banks, injuries to stars like Ember Moon, Ruby Riott, Mickie James and Nia Jax, as well as the unexplained absences of stars like Naomi and Liv Morgan has really stretched the women’s division thin. With all of those stars missing from TV for various reasons, WWE has relied oh so heavily on Lynch, Flair and Bayley to carry a women’s division that shouldn’t be on life support but feels like it is.

What makes that so frustrating is that–as evidenced by all of the female stars involved in the tri-branded elimination match at Survivor Series–WWE has plenty of female talent who can carry its shows even in the absence of stars like Rousey and Jax while Alexa Bliss’s in-ring future remains unclear. Ever since women’s wrestling hit its climax at WrestleMania 35, it’s taken a backseat, slowly morphing from a centerpiece of WWE programming to an overlooked aspect of it once again.

There may be an explanation for that, too. Back in May, the Wrestling Observer Newsletter (h/t Cageside Seats) reported the following about the immediate future of WWE’s women’s division:

“The Wrestling Observer Newsletter notes that WWE business declining in the way it has during the lead up to WrestleMania has led to second guessing of women headlining the show. That’s on top of ratings issues when women’s segments are featured on television.”

In hindsight, it’s hard to disagree that WWE has scaled back significantly on the push of women’s wrestling, which, as noted, has taken some of the blame for WWE’s disappointing earnings and caused WWE to revert back to pushing part-time attractions like Brock Lesnar at the top of the card. That’s not the only sign that WWE is scaling back on the push of women’s wrestling, though.

Sportskeeda’s Tom Colohue has also reported that Vince McMahon had “no plan” for the WWE Women’s Tag Team Championship when those titles were created. An anonymous source told Colohue that McMahon “was under a lot of pressure” to create the belts, and so once he did, he didn’t really have any idea what he was going to do with them next. That’s been obvious by the awful booking of the tag team titles throughout its entire existence, with a series of completely forgettable reigns by duos like Sasha Banks and Bayley, The IIconics and the surprising tag team of Alexa Bliss and Nikki Cross. Currently, WWE is putting a little more effort into the reign of Asuka and Kairi Sane, but it’s not like their run with the straps is setting the world on fire, either.

And as WWE has remained hesitant to truly push its women’s division, there has been no indication that WWE will host a second all women’s Evolution pay-per-view–once thought to be a lock–anytime soon. Stephanie McMahon revealed earlier this year that a second Evolution show isn’t set in stone while Triple H essentially admitted just last month that other matters took priority over Evolution 2.0, even though the event could still happen down the road. But judging by the way the women’s division has been cast aside in recent months as WWE tends to do from time to time, the optimism that was surrounding the women’s division earlier this year has largely disappeared.

Even with a career-defining victory for Ripley and a memorable performance for Bianca Belair at Survivor Series, you have to wonder if WWE will truly follow up on it or if the women’s division will go right back to the backburner where it’s been for quite a while now.

App Store SEO: How to Diagnose a Drop in Traffic & Win It Back

After Fire Damage, Chicago’s The Spice House Reopens With A New and Improved Look