Breaking
The Ultimate Guide to Saving Money
Lights, Camera, Action—Is There A Post-Covid Future For...
7 Ways to Reduce Human Errors in Your...
How ‘Couples Therapy’ Used Technology To Cope With...
Can You Settle Your Student Loans Or Negotiate...
How to Use Amazon Attribution For Ad Campaigns
What are the Makings of a High-Quality Link?
How To Quickly Start And Scale Your Business
Terra Virtua: What NFTs Can Teach Us About...
5 Easy Steps To Prepare Content For E-A-T...
Physical Inactivity Linked To More Severe Covid-19 Infection...
The 2021 Estimated Tax Dilemma: What Tax-Return Pros...
Want To Digitally Transform Your Business? Start With...
How to Optimize Google My Business and Leverage...
Debunking Link Building Myths in 2021
How, When And Where You Can Gaze At...
Home Technology WWE WrestleMania 36 Results: Day 2 Grades, Highlights, And Twitter Reaction
Technology 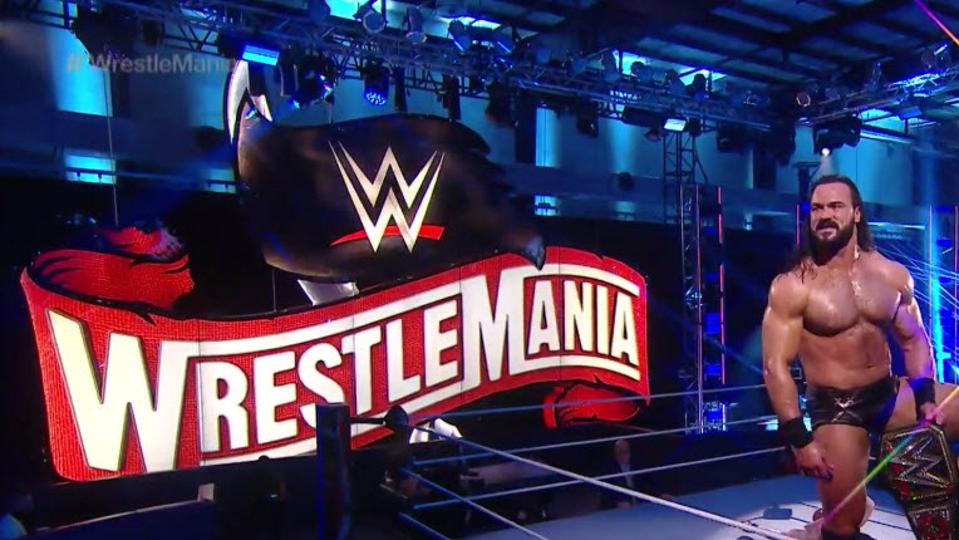 Drew McIntyre won the WWE Championship on Sunday night by defeating Brock Lesnar in a finisher-filled, lazily booked match that would have been even worse had McIntyre not gone over.

Essentially, we saw Lesnar kick out of a series of Claymores, only to have McIntyre thwart pin attempts after receiving multiple F5s. Finally, McIntyre would shift momentum one last time to keep Lesnar down with a definitive Claymore to win the title. That’s not an overly simplistic summary of events, it’s essentially the only thing that happened of any real significance in what felt like a truncated bout to wind up a two-day pay-per-view that was seemingly brought forth against all odds.

Most members of the WWE community didn’t like the match, and made their opinions known on Twitter:

McIntyre is long overdue for a title run, but it’s a shame it had to come in an empty arena, and in such a ho-hum match.

It simply wasn’t very good, and was made to look even worse because it followed the Firefly Funhouse masterpiece between The Fiend and John Cena. In the end, I mostly enjoyed WrestleMania 36, but in all honesty, the main event of Day 2 was one of the event’s weakest points.

Here is the grade for the main event.

If you haven’t seen or heard about the presentation of Fiend-Cena, take a look at the entire show recap below beginning with the Kickoff Show match.

After having her momentum dulled a bit since her high-profile return, Liv Morgan may be trending upward again. On Sunday, Morgan was put over by veteran Natalya in a professional, well-worked, but tame opening match.

The bout started with some respectful chain wrestling, and it featured some traditional back-and-forth action.

Ultimately, Morgan showed off some nice in-ring work and Natty was in her usual solid form in a capable opening to Day 2. Morgan got the pin after a rollup, and this assessment from Fightful sums up the match accurately.

Charlotte is the greatest female performer in wrestling history, and one of the greatest of all time regardless of gender. However, it’s tough to understand her going over against Rhea Ripley in this spot.

First and foremost, the match was spectacular. Then again, we’ve come to expect nothing less from a Charlotte match. The Queen worked Ripley’s left leg, which played on the previous injury angle. That usually doesn’t plant the seeds for a victory, but this was an exception.

Ripley looked strong, athletic and she made her presence felt throughout the match. She sold like a champion and executed her moveset impeccably.

The end came when Charlotte slapped on the Figure Eight, and that forced Ripley to tap out. It was shocking to see Ripley go out in this way considering she’s still on the rise. Perhaps Charlotte will ultimately put over Bianca Belair, and Ripley will go on to something else on the main roster in a few months.

While I loved the match, it’s hard to give this a top rating after a somewhat egregious result. Others appeared to hate the result even more.

We all knew Black would go over in this match, but I was worried about the way it would be executed. Considering the match had no build, this was done pretty well.

Lashley, who emerged with his on-screen wife Lana, is now rocking long wrestling tights over his traditional short wrestling trunks.

Black has some sort of horned, demonic jacket, which is way too goofy. In any case, he’s still great in the ring, and that was on display in the match with Lashley, who looked very explosive in his own right.

The match came to an end when Lashley had Black set up for the Dominator, only to drop him after Lana instructed him to try to finish the match with a spear.

That, of course, set him up to eat Black Mass, and to lose via pinfall. The dissension between Lana and Lashley is inevitable, and this was a decent way to kick that breakup into high gear.

This match was built well, but somehow, this payoff didn’t quite feel fulfilling. Otis won, which was expected, but the match was just OK.

Ziggler is one who can make just about any match look good, but Otis’ lack of stamina and explosion seemingly forced the booking to be a bit more tame.

Sonya Deville accompanied Dolph to the ring, and I still can’t understand why she’s still so involved, and I shutter to think we’re headed for some sort of mixed tag match down the road.

In any case, a Deville distraction allowed Ziggler to hit a low blow kick on Otis. Mandy Rose would show up, attack Deville, and then to hit Ziggler with a low blow that allowed Otis to land the caterpillar and pin to win the watch.

It seems most others found this match to be a little more entertaining.

This match was built expertly. Orton did his best work leading up to this match, but there is no doubt, it was perhaps the most impacted by not having a crowd. The run time was long, but it was well-shot and packed with good spots.

There was no shortage of brutality and energy, but the worst part of the match was the commentary. Tom Phillips and Byron Saxton called this match as if it was a secret. They whispered and kept a calm throughout almost as if they were commentating Wimbledon. It made the match seem even longer and dragged out.

All that said, the wrestlers did a great job, and the ending was the best part. Edge utilized his new submission hold to put Orton asleep, and he solidified the win in the Last Man Standing match with a Concerto.

The takes were mixed after the match:

This was perhaps the easiest match to predict on the entire card. Theory and Garza are very talented, but it’s not their time. SP is on the rise and they weren’t about to lose their titles in their first WrestleMania match.

The match was solid, and the ending was a nice touch because it featured Montez Ford’s real-life wife Bianca Belair coming to rescue of her husband who was being assaulted by Theory, Garza and Selina Vega in the match’s aftermath.

Belair took out Vega and was placed in a position of royalty. This was about as good as a match of this type could have been executed. That said, let’s hope WWE doesn’t keep Ford and Belair attached at the hip for no good reason moving forward.

The inevitable feud between Bayley and Sasha Banks is coming, but not just yet. After a strong, but less than rewarding performance from Tamina, who was eliminated first via a group effort, and good work from Naomi, Lacey, Sasha and Bayley were the final three remaining.

Bayley and Sasha attempted to team up, but things went haywire with the old mistaken strike bit. Sasha was the victim here and she confronted Bayley moments later. Bayley talked her way out of breakdown with her partner, but in an effort to push Sasha out of the way of a charging Evans, she set The Boss up to take the Women’s Right.

Sasha was flattened and eliminated by Evans.

With Evans and Bayley as the final two, the former seemingly was headed for the win. However, Banks came to, re-entered the ring and hit the Bank Statement on Evans to help give Bayley the victory.

As Bayley posed and trash talked on the turnbuckle, Sasha stood in the distance and watched. Perhaps we’ll see this feud develop once WWE is able to return to action, or perhaps it’ll take shape over the course of some upcoming tapings.

The Fiend def. John Cena in the Firefly Funhouse

I didn’t think it would be possible for WWE to top what we saw with the Boneyard Match on Saturday night, but you could make the argument, the Firefly Funhouse was an even better match/presentation than Undertaker vs. AJ Styles.

John Cena was introduced on the ramp as if he was going to be in a standard match, but he was quickly transported to some sort of alternate reality that told the story of his WWE life with himself and Bray Wyatt playing various characters from the past.

It was one of the most entertaining things I’ve ever seen in professional wrestling:

From Ruthless Aggression, to Saturday Night’s Main Event, to the Monday Night Wars, and back to the present, this was a wrestling fan’s dream that finished with The Fiend deleting Cena.

I love Cena and massively appreciate what he has meant to professional wrestling. The fact that he signed off on what Sporting News and DAZN’s Andreas Hale described as an extended squash match, is commendable.

The second night wasn’t as strong as the first night of WrestleMania 36, but the Firefly Fun House match made it worth the four hours.

N95 Masks Have Been Leaving The U.S. During The Coronavirus Pandemic When We Needed Them The Most – What Should Happen Next?