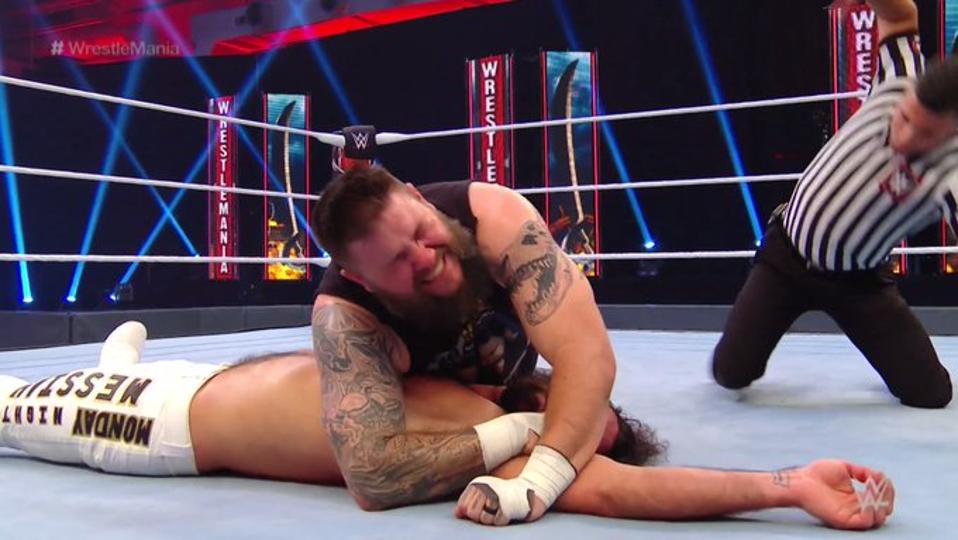 WWE WrestleMania 36 was the beginning of the end for Seth Rollins, whose loss to Kevin Owens paves the way for “The Monday Night Messiah” to recharge his batteries and perhaps even be totally repackaged.

At the biggest pay-per-view of the year, Owens defeated Rollins with a Stone Cold Stunner to cap off a stellar match and the culmination of what has been a lengthy storyline between two of the top stars on Raw. In 2019, Owens and Rollins essentially flip-flopped roles, with the once beloved firmly entrenching himself as a top heel while Owens transformed from loathed villain to mega fan favorite. The outcome of their match at WrestleMania 36 was undoubtedly the right choice as the story WWE had created here was all about Owens finally vanquishing his longtime rival and solidifying himself as a beloved babyface in the process.

Perhaps more important though, Rollins’ loss—and the massive bump he took from Owens—could give him something he desperately needs: An absence from TV and a character refresh.

Following the recent injury to AOP’s Rezar, AOP has disappeared from TV and is expected to be done with Rollins, effectively ending the unofficial stable before it truly got started. That might actually be a good thing for Rollins, who has spent most of the past six years as one of the focal points of Raw, only missing a few stretches of action due to injury. During that span, he has been a mainstay on the red brand—in fact, he’s never been a member of the SmackDown roster—and even after his heel turn late last year, it’s been painfully obvious that he’s gotten stale in his role as one of the cornerstones of Monday Night Raw, even following his heel turn and union with AOP and Murphy.

That was the theme for Rollins last year, too. Rollins’ relationship with the WWE Universe steadily grew rockier throughout 2019, in large part due to his actions on social media and responses in interviews that cast a dark cloud over his once ironclad relationship with the WWE Universe. Despite Rollins being solidified as a top merchandise mover and establishing himself as the most popular star in WWE for a lengthy stretch last year, fans had enough of Rollins, his relationship with Becky Lynch and the way WWE prioritized him over any and everyone else on the red brand.

Even though Rollins has taken a slight dip down the card as a heel, he is still one of the most heavily featured and strongly pushed acts in all of WWE. What’s made that so frustrating for many fans is that the booking of his apparently disbanded stable—consisting of AOP, Murphy and Rollins himself—has been all over the place and certainly hasn’t produced a ton of riveting TV. Given Rollins’ previous struggles to draw as WWE Champion and his continued high-profile role on Raw, it’s no surprise that WWE fans haven’t been too inclined to tune into Raw even with the presence of part-time stars like The Undertaker and Brock Lesnar.

Of course, no one is blaming Rollins himself for the dwindling quality of Raw over the past couple of years, but any time a wrestler is pushed hard in the same position at t the top of the card for such a long stretch, they’re bound to get stale in that role. Even after his heel turn that put him back in his more natural role as a bad guy, Rollins is still a centerpiece of Raw who gets a ton of TV time and just hasn’t been all that interesting of late, instead being hampered by his lackluster faction alongside AOP and Murphy. That’s what makes his loss to Owens at WrestleMania 36 a blessing in disguise of sorts.

Much like Lynch, who could use some time away from TV herself, Rollins would benefit tremendously from an extended hiatus that should ultimately prove the old adage true: That absence does make the heart grow fonder.

It’s been difficult for fans to truly miss Rollins given that he’s always featured heavily, so perhaps a lengthy hiatus—and maybe even a move to SmackDown—could do him some good.

Why Attaching Sports Betting To Local Casinos Is...