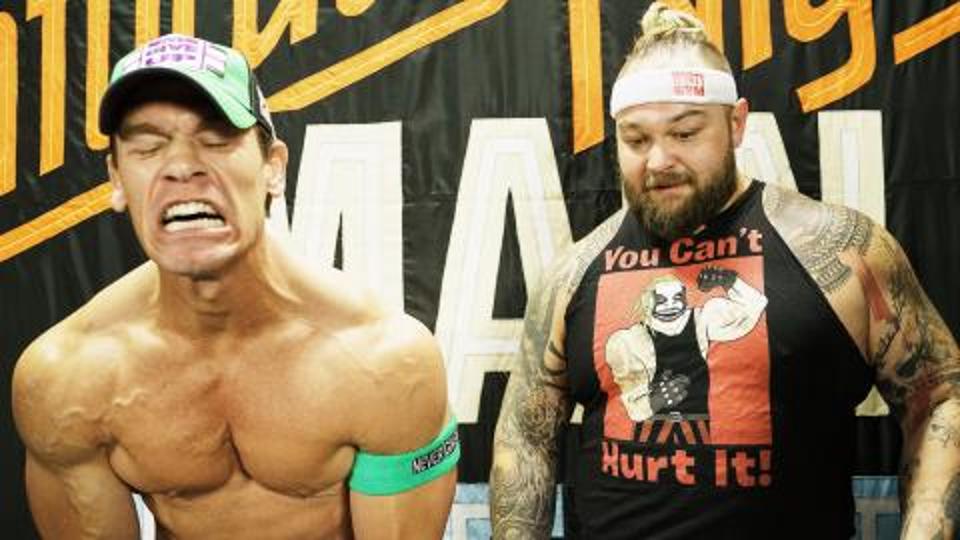 The Firefly Funhouse match between The Fiend Bray Wyatt and John Cena had a tough act to follow after Saturday’s Boneyard Match featuring The Undertaker and AJ Styles.

Somehow, Firefly Funhouse didn’t just meet expectations, it may have been even better than the Taker-Styles masterpiece. WWE’s production and presentation are top notch, and that was on full display in this match that should have been the main event of Day 2.

When the match began, Cena walked out on the ramp as if he were going to participate in a traditional match, but that quickly changed. He was transported into a dream-like sequence that served as a mindtrip from the golden age of WWE through Cena’s biggest moments, his previous feud with Wyatt, and his rise to superstardom outside of the WWE.

It was brilliant. The following images and short videos all came from the journey/match that was the Firefly Funhouse:

Cena and The Fiend reenacted several iconic scenes from WWE history. Saturday Night’s Main Event got some shine along with Eric Bischoff and the NWO, and even CM Punk was shown while Jon Moxley’s negative comments were referenced. WWE pushed the envelope in so many ways, but every gamble paid off.

We all knew The Fiend had to go over in this space, but we couldn’t have asked for it to happen in a more expressive and entertaining way.

The ending was definitive, but I almost forgot we were watching a match. Here’s how the wrestling community responded to the Firefly Funhouse:

With the win, The Fiend is now in a position to regain what he never should have lost after he dropped the title to Goldberg at WWE Super ShowDown.

Perhaps even more important, his status as an almost mythical character in the WWE universe is secure.

It wasn’t for a title, and there were no fans present, but Bray Wyatt couldn’t have had a more appropriate WrestleMania moment.

The New Regular: Your Pre-Pandemic Paradigms Are Shifting

England In Wicketkeeping Crisis Of Own Making: Bairstow,...

How Blackpink Can Reach The Same Stateside Heights...

We Need STEAM, Not STEM Education, To Prepare...