Breaking
Three Essential Components of a Successful Small Business
Pandemic Pet Adoptions Add To Chewy’s Tailwinds, But...
How to Use LinkedIn’s Social Selling Index Like...
Strong Revenue Trend Could Drive EXACT Sciences Corporation...
9 Things To Know Before Starting A Business
‘Game & Watch: The Legend Of Zelda’ Will...
The 9 Fundamental Components Of A Startup Pitch...
How to Get Results from Broken Link Building
Florida Supreme Court Tells The American Bar Association...
How to Write Perfect Paid Social Media Marketing...
How Restaurants Can Design a More Sustainable Food...
Expenses That Small Business Owners Need to Be...
How You Can Make Saying Goodbye To The...
Biden To Meet Royal Family At Cornwall’s Eden...
It’s Going To Be Emotional — Going International...
Peer Mentoring For Students: STEM & Buds
Home Business XpresSpa Warns That New Covid-19 Testing Service May Have A Limited Rollout
Business 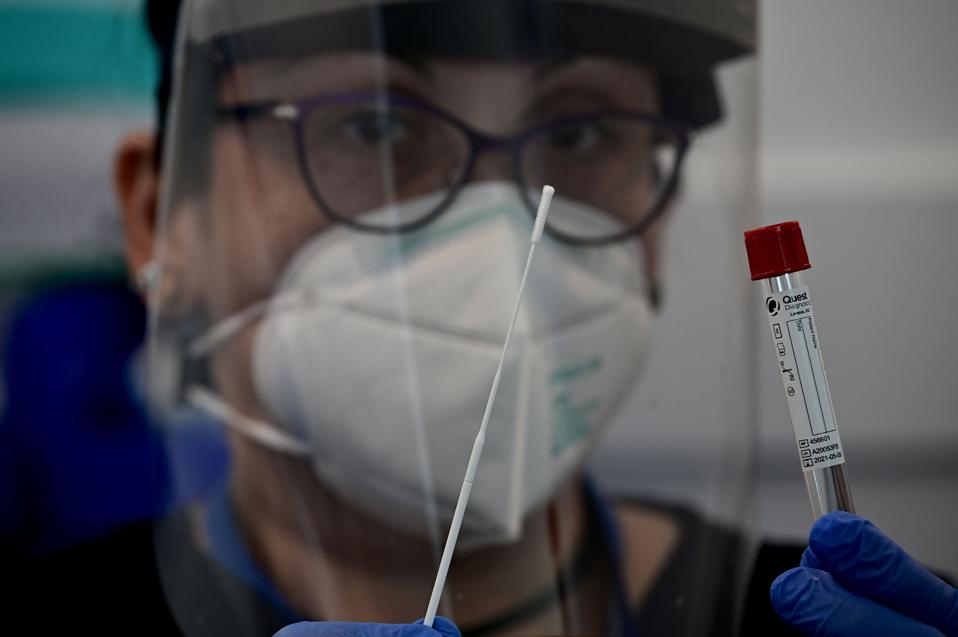 Testing times: Nurse Christina poses with a nasal swab at JFK’s Terminal 4 XpresCheck the first … [+] airport-based Covid-19 testing facility in the US. (Photo by Johannes EISELE/AFP)

Despite a positive reception for the first in-airport Covid-19 test center, XpresSpa Group has warned that similar locations at other gateways may not be widely rolled out.

The specialist airport spa retailer launched its pilot coronavirus testing program at John F. Kennedy Airport on June 22 under the XpresCheck brand, part of the company’s newly-formed XpresTest, Inc. subsidiary. The facility has the capacity to administer over 500 Covid-19 tests per day— either nasal swab or blood antibody tests.

However the company has been cautious about further rollouts. In a business update released on Monday, XpresSpa said: “The likelihood and timing of these possible openings has not been determined and no assurance can be given that the company will expand its XpresCheck brand beyond the current facility at JFK.”

Doug Satzman, CEO of XpresSpa Group, said: “We are thrilled that our pilot Covid-19 testing has launched at JFK in our new modular facility in the arrivals hall at Terminal 4. We remain in active discussions with other U.S. airports regarding the potential rollout of this concept.” He was not available for further comment at the time of writing.

Due to the novelty of the idea, it is probable that other airports are waiting for the results of the JFK pilot before committing to an XpresCheck service in their own locations. XpresSpa previously told Forbes.com that Covid-19 airport testing centers could be created by converting the company’s existing spa locations or by building dedicated spaces like the one at JFK. XpresSpa has 50 locations in 25 airports globally, of which 23 are U.S. gateways. 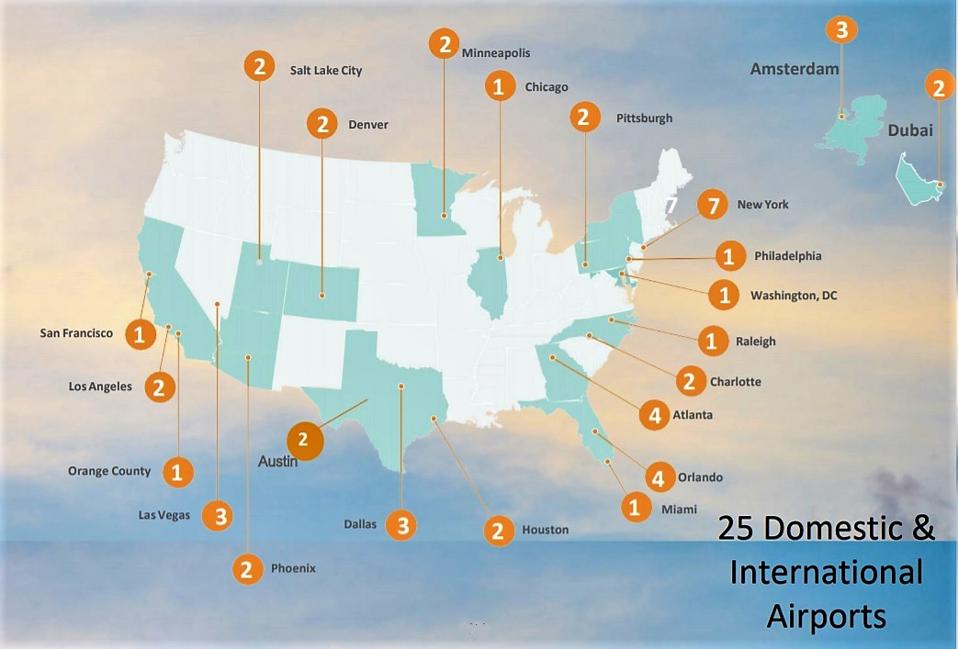 Widely spread: XpresSpa has the reach to become a short-term in-airport test center across the … [+] country.

The Port Authority of New York and New Jersey, which runs John F. Kennedy Airport, was keen to offer Covid-19 testing to terminal staff, airline employees, and airport workers. Port Authority Executive Director, Rick Cotton, describes the service as “an important addition to our commitment to providing a safe facility for workers and travelers alike.” Testing is also open to TSA officers, and U.S. Customs and Border Protection agents. XpresSpa says it intends to expand the service to travelers in the future.

The company partnered with HyperPointe to design a workflow with the potential to test thousands of people each week. It could also collect and organize confidential patient data that would be used to study and better understand the impact of the COVID-19 virus. All insurance plans are accepted outside of network, and all information remains private and compliant with the Health Insurance Portability and Accountability Act.

In the business update, Satzman, also talked about XpresSpa’s “significantly strengthened” balance sheet. In a statement he said: “The approximately $48 million in gross proceeds that we have raised since January, through a series of registered direct equity offerings have been truly transformational and we appreciate the investment community’s confidence in us as we work to reimagine our health and wellness service offerings.”

On March 24, the company temporarily closed all of its global spa locations, largely because they were deemed “non-essential services” in the context of Covid-19 by local jurisdictions. However the impact of fewer airport passengers had already impacted the business before that.

First quarter 2020 revenue fell to $7.7 million from $12.2 million in the prior year first quarter. Comparable store sales decreased 26.5% during the period and the net loss grew from $2.8 million to $10.7 million.

XpresSpa says it will reopen its spa locations and resume operations as soon as restrictions are lifted and when “airport traffic returns to sufficient levels to support operations”. The company’s share price has traded slightly higher this week. It opened on Monday at $3.86 and closed today at $3.99.