Breaking
The Impact of Internships in Marketing
3 use cases of chatbots for critical services
How To Make Working From Home Appeal To...
Tips on How to Design an Office Space...
4 Tips To Help Build Amazing Customer Relationships
How Are US Pension Funds Responding to the...
Benefits of second-hand cars for your business
4 Reasons Why Your App Needs To Undergo...
Your Guide to Online Marketing
How to find a Solicitor in London
5 car tyre and safety tips for a...
Everything You Need to Know About Corporate Social...
Is Adaptive Leadership the Key to Motivating Employees?
Why business events are set to return with...
Business events set to return with a bang!
Expanding Internationally: 5 Things to Consider for eCommerce...
Home Business Yamaha Should Revive Their 1990s GTS1000 Futurecycle As A 2020s Electric Motorcycle
Business 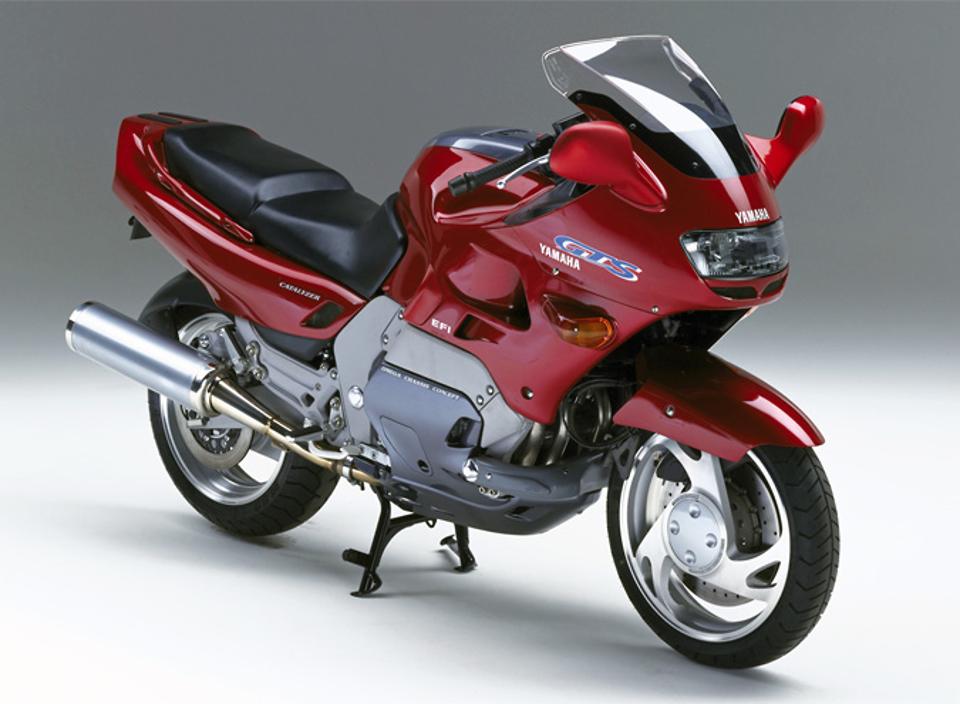 The 1993 Yamaha GTS1000 was pretty much unlike any motorcycle that had come before. Could it make a … [+] comeback as an electric bike?

Of the big four Asian motorcycle makers, Yamaha is in third place in terms of size and sales, but they have often been the boldest in terms of product design. They were arguably the first bike maker to truly begin breaking away from the inline-four “UJM” trend in the 1980s with the then sci-fi-ish V-Twin-powered 550 Vision sport (or at least “sportier”) bike in 1982, and followed that up three years later with the courage-testing V-Max 1200, a nearly 150-horsepower V4-powered street sweeper that is largely credited with creating the “muscle bike” category – and continues to be sold today in an even more frightening iteration. Today, Yamaha continues to think outside the two-wheeled box with bikes like the three-wheeled, category-defying Niken machine and the insect-like Motoroid concept bike. But oddly, and just like its three main competitors, Yamaha does not yet sell a broad-market electric motorcycle.

Yamaha’s boldest stroke arguably came in 1993, when it debuted the other-worldly GTS1000. Ostensibly a sport-tourer before that category was really even a thing, it was another outlier that looked more like a sci-fi movie prop than something you could walk into a dealership and actually buy. Featuring a re-tuned 1,002cc “Genesis” inline-four cribbed from the stonking FZR1000 sportbike that featured five valves per cylinder mated to a shaft drive and a radical James Parker-inspired RADD single-sided front suspension, it was a showcase of innovation. The GTS1000 also featured a novel and striking “Omega” frame and future-standard bits like a catalytic converter, real ABS brakes and fuel injection when most bikes still sucked fuel through carburetors and made do with single-piston brakes that were only “anti-lock” because they wouldn’t lock no matter how hard you squeezed the lever. It was a halo bike to be sure, and cost an eye-popping $13,000 when it debuted, a figure that could buy a decent new car at the time. Being a bit too futuristic, it didn’t sell well of course, and only lasted in the U.S. market for two years while soldiering on elsewhere until 1999. Today, it’s a sought-after modern classic.

Looking at the bulbous, aerodynamic fully-enclosed form factor of the GTS1000 today, I’m struck by the audacity Yamaha had to construct such a machine way back in the ‘90s, and wonder if it could return today as something both still radical but also timely: As an electric motorcycle.

Yamaha has shown off their concept electric bike, the Motoroid (gonna need a name change there if it ever sees production, which is unlikely), but its insect-like “living machine” look and radical architecture is such a departure that while it’s chock-full of good ideas, it’s too far out there even for me.

Of course, Yamaha would have to re-engineer the GTS from the ground up, but if it kept the alt-think RADD front suspension, massaged the look and aero just a bit while still paying homage to the original and then used all that Omega frame space to perhaps punch the range out to 200-plus miles of combined city/highway use, they might have a winner on their hands. In truth, with just a tick over 100hp, the original GTS1000 wasn’t really a hot-rod of a ride, but that wasn’t the point; it was actually more of a refined BMW-like experience oozing with Yamaha’s tech prowess. Give the electric version 125hp and 150-odd foot-pounds of torque (perhaps with some optional UI-accessible higher power levels) with all that range and keep the price reasonable…. well, I’d be in line to buy one.

While bikes like the Yamaha Motoroid look to one possible future, electric bikes that are currently moving units like the offerings from Zero, Lighting, Harley-Davidson and others make it clear to me that while riders are certainly interested in electric machines, perhaps the form factor needs to be at least familiar (Harley) if almost deceptively similar (Zero, Lightning) to gas-powered rides. With an electric GTS, Yamaha could play a card that is both familiar and boldly futuristic. They could be the first Japanese bike maker to break the seal on a scale production electric bike, something that is oddly missing from the Big Four’s portfolio.

Inside Outreach: The Hard-Charging Cloud Startup Thriving In Salesforce’s Shadow