Home Technology You Are Not Mostly Empty Space
Technology

You Are Not Mostly Empty Space 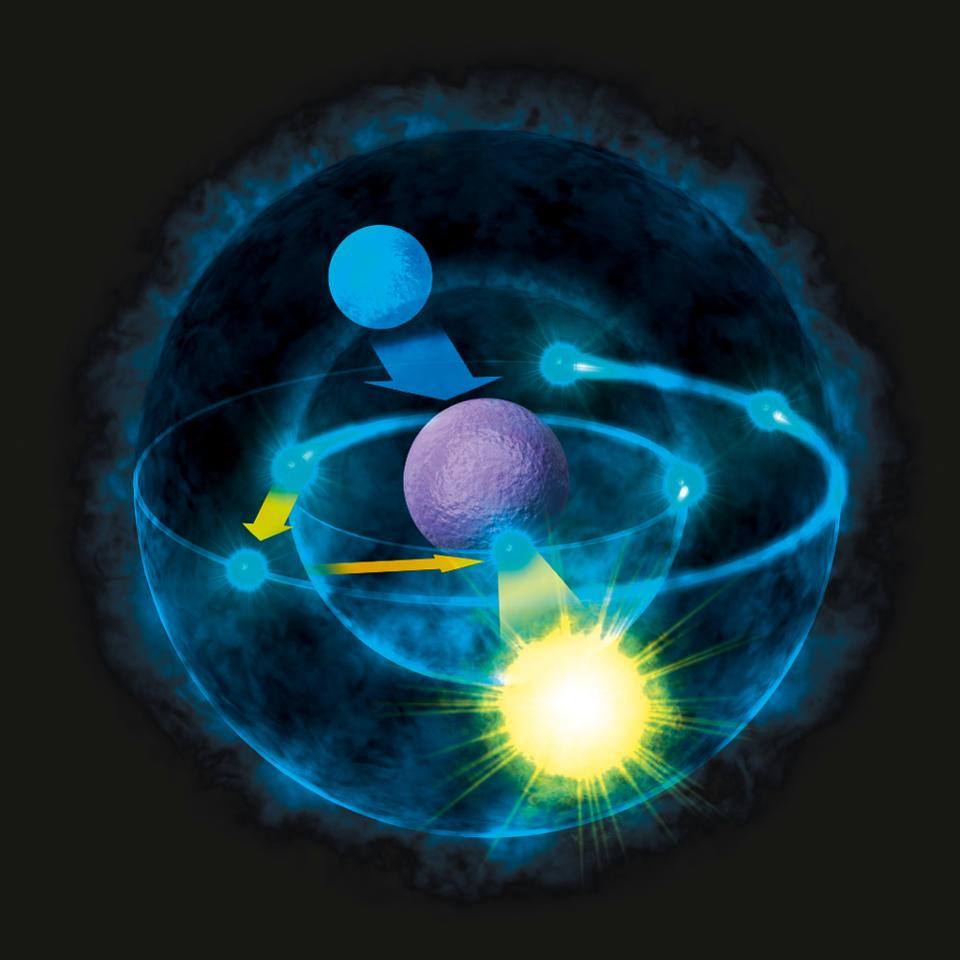 Because bound states in the Universe are not the same as completely free particles, it may be… [+] conceivable that the proton is less stable than we observe it to be by measuring the decay properties of atoms and molecules, where protons are bound to electrons and other composite structures. With all the protons we’ve ever observed in all our experimental apparatuses, however, we’ve never once seen an event consistent with proton decay.

If you were to look at what your body is made of, at smaller and more fundamental levels, you’d find a whole miniature Universe of structure inside you. Your body is made of organs, which are in turn made of cells, which contain organelles, which are composed of molecules, which themselves are linked-up chains of individual atoms. Atoms exist on extremely tiny scales, just 1 ångström across, but they’re made of even smaller constituents: protons, neutrons, and electrons.

The tiny sizes of the protons and neutrons making up each atom’s nucleus are known: just one femtometer apiece, 100,000 times smaller than an ångström. But the electron itself is indistinguishable from point-like, no more than 1/10,000th the size of a proton or neutron. Does this mean that atoms — and by extension, everything made of atoms — are mostly empty space? Not at all. Here’s the science of why.

From macroscopic scales down to subatomic ones, the sizes of the fundamental particles play only a… [+] small role in determining the sizes of composite structures. Whether the building blocks are truly fundamental and/or point-like particles is still not known, but we do understand the Universe from large, cosmic scales down to tiny, subatomic ones.

In our normal experience, if you want to know how big something is, you just go ahead and measure it. For non-quantum objects, this isn’t a problem, as different methods of measuring an object all give you the same answer. Whether you use a measuring stick (like a ruler), high-definition imaging, or a physics-reliant technique like Brownian motion or gravitational settling, you’ll arrive at identical solutions.

But for the smallest objects of all, like single atoms, these techniques are no longer effective. The first attempt to probe the interior of atoms came shortly after the discovery of radioactivity, and was actually ingenious. By firing the particles emitted by radioactive material at a thin sheet of atoms, Ernest Rutherford attempted to determine what happened when you examined an atom’s interiors. What he found shocked the world.

If atoms had been made of continuous structures, then all the particles fired at a thin sheet of… [+] gold would be expected to pass right through it. The fact that hard recoils were seen quite frequently, even causing some particles to bounce back from their original direction, helped illustrate that there was a hard, dense nucleus inherent to each atom.

These fast-moving particles were fired at a very thin sheet of gold foil, hammered so thin that it would fall apart if touched by bare human hands. While most of the particles went straight through, a small but substantial fraction were deflected, with some even returning back in the reverse of their original direction. As Rutherford himself remarked some 15 years later,

It was quite the most incredible event that has ever happened to me in my life. It was almost as incredible as if you fired a 15-inch shell at a piece of tissue paper and it came back and hit you.

When you collide any two particles together, you probe the internal structure of the particles… [+] colliding. If one of them isn’t fundamental, but is rather a composite particle, these experiments can reveal its internal structure. Here, an experiment is designed to measure the dark matter/nucleon scattering signal; deep inelastic scattering experiments continue even to the present day.

But these high-energy conditions, where conventional atoms and atomic nuclei are bombarded with particles moving close to the speed of light, are not the conditions that the atoms in our everyday lives typically experience. We live in a low-energy Universe, where the atoms in our bodies and the collisions that take place between various particles are less than one-billionth the energy of what the Large Hadron Collider reaches.

In our quantum Universe, we frequently talk about wave-particle duality, or the idea that the fundamental quanta that make up the Universe exhibit both wave-like and particle-like properties, depending on what conditions they’re exposed to. If we go to higher and higher energies, the quanta we’re examining act more like particles, while at lower energies, they act more like waves.

The photoelectric effect details how electrons can be ionized by photons based on the wavelength of… [+] individual photons, not on light intensity or total energy or any other property. If a quantum of light comes in with enough energy, it can interact with and ionize an electron, kicking it out of the material and leading to a detectable signal.

We can illustrate why by examining the photon: the quantum of energy associated with light. Light comes in a variety of energies, from the ultra-high energy gamma rays down through the ultra-low energy radio waves. But light’s energy is closely related to its wavelength: the higher the energy, the shorter the wavelength.

The lowest energy radio waves we know about are many meters or even kilometers long, with their oscillating electric and magnetic fields being useful in causing the electrons inside antennae to move back-and-forth, creating a signal that we can use and extract. Gamma rays, on the other hand, can be so high in energy that it takes tens of thousands of wavelengths to fit across even a single proton. If the size of your particle is larger than your wavelength of light, the light can measure its size.

But if your particle is smaller than the light’s wavelength, the light won’t be able to interact with that particle very well, and will behave like a wave. This is why low-energy photons, like visible light photons, will create an interference pattern when they’re passed through a double slit. So long as the slits are large enough that the light’s wavelength can get through them, you’ll get an interference pattern on the other side, demonstrating this wave-like behavior.

This is true even if you send the photons through one-at-a-time, indicating that this wave-like nature isn’t occurring between different photons, but that each individual photon is interfering with itself somehow.

This remains true even if you replace the photons with electrons, as even massive particles can act like waves under low-energy conditions. Even low-energy electrons sent one-at-a-time through a double slit can add up to produce that interference pattern, demonstrating their wave-like behavior.

Most of us view atoms as collections of atomic nuclei orbited by individual electrons. While this… [+] might be a useful visualization for some purposes, it’s catastrophically insufficient for understanding the location or physical extent of the electron in space at any given time.

When we picture an atom, most of us instinctively revert to that first model we all learned: of a point-like electron orbiting a small, dense nucleus. This “planetary model” of the atom first came about due to Rutherford, and was later refined by Niels Bohr and Arnold Sommerfeld, who recognized the need for discrete energy levels.

But for the better part of the past century, we’ve recognized that these models are too particle-like to describe what’s actually occurring. Electrons do occupy discrete energy levels, but that doesn’t translate into planetary-like orbits. Instead, the electrons in an atom behave more like a cloud: a diffuse fog that’s spread out over a particular volume of space. When you see illustrations of atomic orbitals, they’re basically showing you the wave-like shape of the individual electrons.

The each s orbital (red), each of the p orbitals (yellow), the d orbitals (blue) and the f orbitals… [+] (green) can contain only two electrons apiece: one spin up and one spin down in each one.

If you were to send a high-energy photon or particle in there to interact with an electron, sure, you could pin down its position precisely. But — and here’s where quantum mechanics trips most of us up — the act of sending that high-energy particle in there fundamentally changes what’s going on inside the atom itself. It causes the electron to behave like a particle, at least for the moment of that one interaction, instead of like a wave.

But until such an interaction occurs, the electron has been acting like a wave all along. When you have an isolated, room temperature atom, or a chain of atoms linked up in a molecule or even in an entire human body, they’re not acting like these individual particles with well-defined points. Instead, they’re acting like waves, and the electron is actually located all throughout this ~1 ångström volume, rather than in one particular point-like location.

Hydrogen density plots for an electron in a variety of quantum states. While three quantum numbers… [+] could explain a great deal, ‘spin’ must be added to explain the periodic table and the number of electrons in orbitals for each atom.

The better way to think about an electron is like a “fog” or a “cloud,” spread throughout the space around an atomic nucleus. When two or more atoms are bound together into a molecule, their electron clouds overlap, and the electron’s extent in space gets even more diffuse. When you press your hand up against another surface, the electromagnetic forces from the electrons on that surface push against the electrons in your hands, causing the electron clouds to distort and deform in their shapes.

This is counterintuitive, of course, because we’re so used to thinking of the fundamental constituents of matter in terms of particles. But it’s better to think of them as quanta instead: behaving like particles under high-energy conditions but behaving like waves under low-energy conditions. When we’re dealing with atoms under normal terrestrial conditions, they’re wave-like, with individual quanta occupying large volumes of space all on their own.

If you took an atomic nucleus and bound only one electron to it, you would see the following 10… [+] probability clouds for each electron, where these 10 diagrams correspond to the electron occupying each of the 1s, 2s, 2p, 3s, 3p, 3d, 4s, 4p, 4d and 4f orbitals, respectively. The electron is never located in one specific place at one particular time, but rather exists in a cloud-like or fog-like state, spread throughout a volume of space representing the entire atom.

But down in the quantum realm of atoms, photons, and individual electrons, wave-like behavior is just as fundamental as particle-like behavior, with only the conditions of the experiment, measurement, or interaction determining what we observe. At very high energies, experiments can reveal that particle-like behavior we’re so familiar with. But under normal circumstances, like the ones we consistently experience in our own bodies, even an individual electron is spread out over an entire atom or molecule.

Inside your body, you aren’t mostly empty space. You’re mostly a series of electron clouds, all bound together by the quantum rules that govern the entire Universe.

HBO Documentary Shows The Value Of Cybersecurity In Election Security

Qantas Won’t Benefit If Virgin Australia Goes Out Of Business, Through Insolvency Or Administration