You’ve Been Warned:Bad Housing Policy Is A Trojan Horse For Socialism 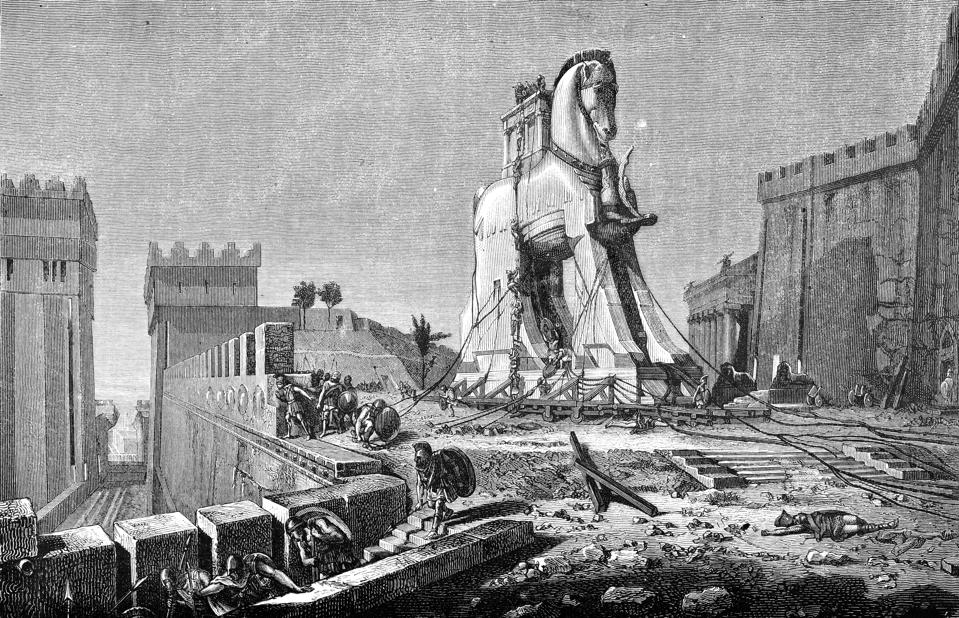 Steel engraving of trojan horse from 1875

Earlier this week the Seattle City Council heard public comments on a proposal to ban eviction during the winter months, from November 1 through March 31st each year. Often with such proposals, media coverage emphasizes the anecdotal plight of the tenant and the message of the advocates. This time, questions about the need for and implications of such a measure were included. And there was a muted sense of vindication in this coverage for me.

First, I have to emphasize that my arrival at my current embrace of what some would call “neo-liberal” economics was preceded by a journey through old fashioned liberalism — I ran for the Washington State Legislature as the first Democrat to openly campaign for a statewide income tax. What changed my mind?

I spent years as an advocate for planning, specifically urban planning. During the 90s I worked as a neighborhood volunteer and then at the City of Seattle as a what was called a Neighborhood Development Manager. In the subsequent decade, I worked in public health, and during that time the cities 37 neighborhood plans sort of died of neglect; then the economy crashed largely because of a housing credit bubble.

Something changed after 2008. Suspicion grew about “big business” and banks. By the time the economy started to recover and the housing market in Seattle began to boom, the suspicion about capitalism and change brought to the urban landscape by economic growth merged; neighbors and self-identified socialists had a common enemy in the rapid growth of tech jobs and rising demand for housing.

Socialism has not just alloyed with what many call the Not In My Backyard (NIMBY) crowd but also the Yes In My Backyard (YIMBY) crowd. But the beginning of this decade it became cool to be a socialist; land use and housing policy wasn’t about density anymore but about social justice and solving wealth inequality and racism. Meanwhile, I had realized that what was causing rising housing prices wasn’t more jobs and growth, but lagging supply in the face of the rising demand created by a good thing: more jobs.

This view was dismissed as “too Republican” for Seattle. Supply, I was told, won’t solve the problem. I was dismissed as a shill, an “upzone cheerleader, and yes, even a neo-liberal. Finally, when I became a paid advocate for growth and more supply, the epithet many settled on was “developer lobbyist.” Technically I don’t lobby, but the term is used to indicate somehow I work for the “black hats.” Who’d do that unless they were paid?

Today, I freely quote Hayek and Friedman. I’m convinced that functioning markets facilitate not just economic growth but the development and exchange of ideas an that they facilitate innovation. And while this requires a dose of inflation, it is inflation, not corporate greed, that is the greatest threat to people with less money and people of color battling institutional racism.

I’m not invited to the party anymore. As Arlo Guthrie might say, I’m on the Group W bench with rural Republicans, property rights advocates, and, yes, Trump voters (gasp!). While I’ve moved to the right, everyone else has made a steady move left. And that brings us to the proposed winter eviction ban.

I’ve been giving a presentation around the country explaining why I think that there is a spontaneous movement to eliminate private rentals. My evidence is the mounting regulatory burden placed on the tenant-landlord relationship, really a buyer-seller relationship. The movement, disparate as it is, has limited the sellers options who to sell to by eliminating credit checks and other screening, how much sellers can charge (rent control), and finally complicating the eviction process. What’s next, I ask: A ban on evictions!

I believed what I was saying, but I wasn’t sure when and how it would happen. A winter ban gets us about halfway there; 5 months out of 12. Being right is satisfying; but there is a sense in which it is scary. Seattle and the nation really are tipping toward socialism. Here’s what local Seattle Times columnist Danny Westneat said:

“But Valdez is right that Sawant’s ordinance tips full-on into socialism. It’s the real kind, too, not the modified “democratic socialism” of presidential candidate Bernie Sanders, in which he would probably propose taxing the broader populace to help those who are struggling to pay the too-high rent.”

Westneat even uses my word, “commandeer” in his column to describe what amounts to seizure of private property for public use. Sawant’s eviction ban isn’t about distribution of tax revenue, or expansion of an entitlement, it is confiscation of real property, what Marxists would call the “means of production.”

In the Aeneid, after Trojan priest Laocoon utters the famous line about Greeks bearing gifts he hurls his spear at the side of the wooden horse on the beach outside the city of Troy. The hollow sound it makes is followed be the vibration of the pole and more rattling from within. Had the leaders of Troy listened the city would have been saved; but then there would have never been a Rome. Will the country wheel socialism into the heart of its economy or will it set fire to it right there on the beach? It depends on who’s listening and whether they hear that hollow echo from within the beast that is the sound of failures from the past.

Miami Stays Dominant When They Should To Maintain...

In Out Of Control Times, Work On Your...