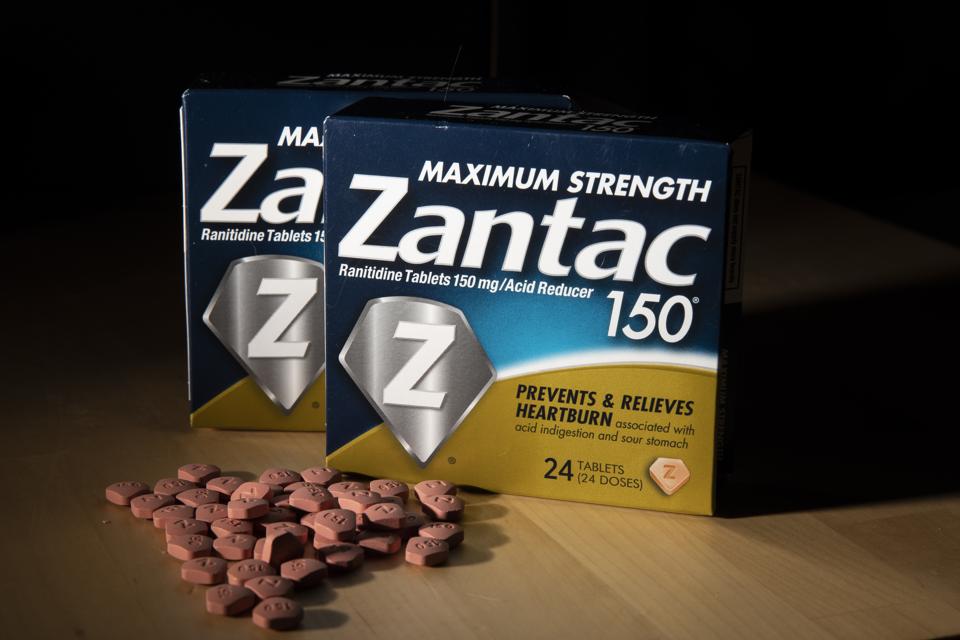 The U.S. Food and Drug Administration (FDA) has called for the immediately withdrawal of all … [+] ranitidine products such as Zantac, pictured here. (Photo Illustration by Drew Angerer/Getty Images)

If you go to your local pharmacy or convenience store, you won’t be able to find any Zantac or other products made out of ranitidine. At least, you shouldn’t. But it’s not because people are now hoarding these heartburn medications like they have been toilet paper. Rather the U.S. Food and Drug Administration (FDA) is now asking manufacturers to immediately pull from the market all ranitidine medications. That’s all as in both prescription and over-the-counter (OTC) versions.

The FDA took this action because they could no longer stomach the amount of N-Nitrosodimethylamine (NDMA) that could be contaminating ranitidine medications. As I covered for Forbes, back in September 2019, the FDA had issued a warning about finding NDMA, a probable human carcinogen, in tested samples of ranitidine. “Probable human carcinogen” means that at high enough levels NDMA can likely cause cancer. At the time, the FDA deemed the levels that they measured to be low enough to not merit a call to recall the medication.

Ah, but such low levels didn’t fully capture what may be in store for customers. Subsequent testing has revealed that when you store the medications at room temperature, levels of NDMA can actually increase over time. Exposing the product to even higher temperatures can lead to even greater increases in NDMA. In fact, the FDA found that “the older a ranitidine product is, or the longer the length of time since it was manufactured, the greater the level of NDMA,” in the words of the FDA announcement. Thus, if you extrapolate these relationships, at some point, NDMA levels in the medications may eventually exceed acceptable daily intake limits. Urp.

So if you are taking any type of OTC ranitidine, whether it is Zantac or some other version, whether it is tablets or liquids, stop it. Stop it now. If you are worried that your “heatburn will go on,” there are a number of other options. Usually, you should try lifestyle modifications first before opting to take a heartburn medication. Examples of lifestyle medications include avoiding things that may predispose towards heartburn such as smoking, drinking coffee or carbonated beverages, eating fried food, chocolate, or spicy foods, eating large meals, lying down within two hours of eating a meal, and wearing tight clothing. If lifestyle modifications don’t work, there are other heartburn medications available. For example, the FDA announcement specified that it had not found NDMA issues in famotidine (Pepcid), cimetidine (Tagamet), esomeprazole (Nexium), lansoprazole (Prevacid) or omeprazole (Prilosec). If you are taking prescription ranitidine, check with your doctor first before discontinuing the medication. There may be reasons why your doctor want you on a specific medication.

Also, make sure that you safely dispose of any remaining ranitidine. That means placing the medications securely in a bag before putting it in the trash. This will prevent it from accidentally ending up in your or someone’s else’s mouth, which is not a proper waste disposal receptacle, no matter how dirty the mouth is. The packet insert for the medication typically has specific instructions on proper disposal. This FDA video also offers some tips as well:

Normally, one option would be to take the medications to a drug take-back location. But, of course, these aren’t normal times. The current COVID-19 coronavirus pandemic means that you shouldn’t overlook social distancing measures such as stay-at-home orders just to go to such a location.

Ranitidine is not the first medication to have issues with NDMA contamination. As I indicated previously for Forbes, NMDA contamination led to the 2018 recall of certain blood pressure medications. All of this calls for a closer look at the processes involved in manufacturing, storing, and transporting such medications and perhaps other medications. How well are these processes being monitored? How may have contamination occurred? What can prevent something like this from occurring again? After all, not being able to trust the safety of the medication supply, could in itself cause more than just heartburn.

Covid-19 And Climate Change: Asia’s Policy Choices In The Age Of ‘Crisis’

How Will Coronavirus Impact Credit Scores And Small...

Pay Attention To These Sales Trends

Stefon Diggs And Buffalo Bills Seem To Be...

How To Decide Where To Expand Your Business

Champagne, LVMH, Gruyère: Here’s What Could Be Hit...