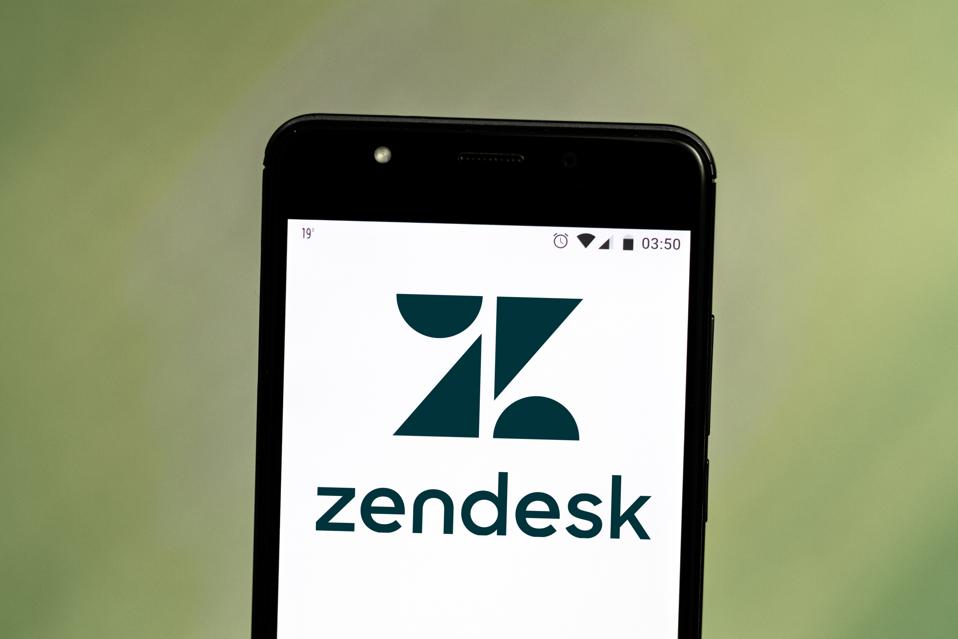 Shares of Zendesk in the middle of March hit a new 52-week low of $50.23, falling 45% from the … [+] February high. Recently trading at $81, the stock has rebounded 61% from the March low (Photo Illustration by Rafael Henrique/SOPA Images/LightRocket via Getty Images)

Investors in Zendesk (ZEN) are weighing the stock’s relatively modest valuation against the near-term risk of a higher churn rate among the company’s small and midsize business (SMB) customers, which would pressure overall growth.

Ahead of the release of Zendesk’s Q1 results in late April, investors were concerned about the company’s exposure to SMBs and the potential for greater customer churn given the current macro environment. Zendesk, a provider of cloud-based customer support solutions, has 160,600 customers, many of which are SMBs.

A few Wall Street firms issued cautious commentary on Zendesk prior to the earnings report. Wedbush downgraded the stock to ‘Neutral’ with a price target of $72 (reduced from $97), calling out heightened attrition risk and expectations for lower new sales activity due to the pandemic. Even if the company can continue to navigate its shift to the enterprise market, Wedbush said it expects Zendesk to experience a greater churn rate over the near-term than its more enterprise-focused CRM peers.

Some firms reduced their Zendesk price targets, while maintaining a positive longer-term view. RBC Capital trimmed its target to $90 from $100, but kept an ‘Outperform’ rating. The firm thinks churn rates could increase through Q3 to roughly 30% above historical levels. It’s just too early to tell how badly small businesses will be hurt or how quickly the economy can recover. RBC still thinks Zendesk shares have upside potential, citing fundamental and valuation considerations.

On April 30, Zendesk reported Q1 EPS of 10 cents, four cents above the consensus estimate, on revenue of $237.5 million (+31% year over year), topping the consensus of $236.8 million. The customer count increased 10% year over year. The dollar-based net expansion rate only dipped to 115% versus 116% in each of the two previous quarters.

For Q2, Zendesk forecasted revenue of $237 million to $243 million, below the consensus of $246.1 million. The company withdrew its guidance for the year.

While Q2 top-line guidance missed expectations, the outlook still calls for respectable growth of 23% at the midpoint. Zendesk management said it has started to see a higher level of contraction, especially across the SMB customer base. For smaller accounts, the company is extending payment terms and offering discounts in some cases. On larger accounts, it’s mainly a matter of some big expansion deals being pushed out for now, not total cancellations of projects.

On the day after the Q1 report, the stock fell as much as 8.8%, hitting a low of $70.05. But it has since rebounded, as investors were encouraged that things weren’t as bad as some had expected. On the earnings call, Zendesk CFO Elena Gomez said about 20% of the business has exposure to troubled sectors. The company is being proactive with customers that are having difficulty, trying to accommodate them with easier payment options.

The goal is to maintain as many customers as possible, with the hope that any troubled SMBs will return to their normal payment schedules once the economy begins to improve. Changes to payment terms are preferable because they’re seen as more temporary compared to changes in contract terms. Zendesk debuted a six-month free Remote Support Bundle to help smaller customers better handle the shift to remote working environments.

The latest earnings report included some encouraging news. Zendesk in Q1 saw a number of larger deals close with short sales cycles, as some enterprise customers sought to quickly improve interactions with their own customers, particularly in the form of new messaging channels, part of the Work From Home trend. The Sunshine Conversations feature, which debuted on the platform last October, saw “very strong demand,” according to Zendesk CEO Mikkel Svane.

Following the release of the Q1 report, Piper Jaffray downgraded the stock to ‘Neutral’ with a price target of $76, citing rising execution risk over the next two quarters. The firm will wait for signs of customer stability before getting bullish again. But Jefferies lifted its Zendesk target to $85 from $80, saying it was impressed with the Q2 guidance and likes the valuation.

Rita Wilson On Her New Single “Where’s My Country Song?” & Why She’s So Passionate About Music

Why Asset Managers Should Keep The ESG Momentum Going

New Survey Finds 22% Of Americans Have Been...

Exponential RPA And AI At Nielsen