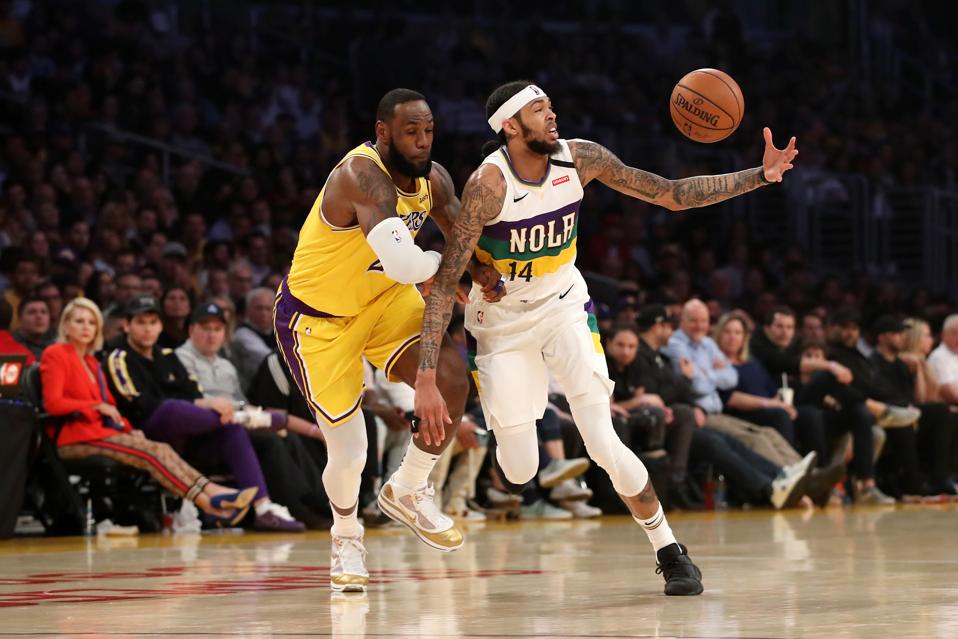 LOS ANGELES, CALIFORNIA – FEBRUARY 25: Brandon Ingram #14 of the New Orleans Pelicans loses control … [+] of the ball against LeBron James #23 of the Los Angeles Lakers during the first half at Staples Center on February 25, 2020 in Los Angeles, California. NOTE TO USER: User expressly acknowledges and agrees that, by downloading and or using this Photograph, user is consenting to the terms and conditions of the Getty Images License Agreement. (Photo by Katelyn Mulcahy/Getty Images)

The Los Angeles Lakers first scheduled game after the tragic passing of Kobe Bryant, his daughter, and seven others was canceled. The first Lakers home game actually played after the tragedy was a surreal environment of mourning and disbelief. The first game after the celebration of the life of Kobe and Gianna Bryant was a testimonial to great basketball and the New Orleans Pelicans had the honor to take part. They apprised themselves well and showed that a potential NBA Playoff series would be full of intriguing matchups.

In the era of tanking, it might seem foolish to even chase the final playoff spot. Much like the Portland Trail Blazers against New Orleans, the Pelicans have yet to win a game against the Los Angeles Lakers. Arguments that New Orleans is a deeper team fall flat when looking at the box score. The Lakers trusted more players with more minutes in consequential situations. Why offer the team up for an all but inevitable first-round series loss?

David Griffin was emphatic this preseason. He expects the core of this team to compete for championships soon. History suggests though, fringe playoff teams constantly chasing low seeds that lead to first-round exits get stuck in mediocrity. This is one of the few years that earning a playoff spot would not hurt the team’s future championship window. This is not a top-heavy draft but there is talent in the middle of the bell curve. A lottery pick is not that much more valuable to New Orleans. If they want a player but have the 17th overall pick, the front office have the assets to move up in the draft. Those same future draft assets will be enough to acquire another playoff-caliber starter.

This roster will have to suffice for the rest of the season, including a game against the Lakers this Sunday. Williamson started the game defending Davis. Holiday guarded Lebron James in the post. Lebron spoke about his respect for Holiday’s post defense after the game. Some 40 point nights, a player just cannot be stopped. This is especially true late in the season when effort wanes on teams with losing records. James had to earn that prolific stat line against New Orleans.

Watching James solve another basketball puzzle like this New Orleans Pelicans squad is just one of many reasons for everyone outside of Memphis to root for this playoff series. For at least four games James would be tasked with perhaps his toughest first-round series ever, after spending half his life figuring out ways to beat every unique matchup. Zion Williamson, in Alvin Gentry’s offense, with this roster, offers a very unique matchup for the Lakers.

Los Angeles has more top-end All-World talent on their roster. On the flip side of the Anthony Davis trade though, the New Orleans Pelicans might prove to have more fringe All-Star depth. The problem is utilizing that talent discrepancy in the fourth through ninth spots on the roster to mitigate the Davis-James duo dominating Holiday, Ingram, and Williamson. Gentry could still experiment with a few lineups that would create new questions for James and Davis to solve.

The Pelicans might even steal a game or two, injecting the roster with confidence before the summer break. Just imagine the hyperbole next season. It is not such a far-fetched future. New Orleans has kept every game close and held leads in the fourth quarter in Los Angles last night. It could even be argued the Pelicans did not even play anywhere near their best game last night.

Ingram (34 points, 7 rebounds, 4 assists, 2 steals) had 7 turnovers. Williamson (29 points, 6 rebounds, 3 assists, 1 steal) helped carry the load on offense but Holiday (11 points, 5 rebounds, 9 assists, 2 steals) was worn down playing defense on James. Holiday was called for five fouls. The Pelicans cannot operate with Holiday in foul trouble. Holiday shot only 5/19 from the field, though he was roughed up in the lane without any favorable whistles being blown.

Lonzo Ball only had 10 points. Derrick Favors (8 points, 3 rebounds) had a quiet night on both ends. Josh Hart and JJ Reddick accounted for only six points. Nicolo Melli finished with a decent stat line but looked hesitant in the big moments. That is not a good look in Hollywood but he has time to better learn his lines.

The same goes for Alvin Gentry and a more detailed strategy. Jahlil Okafor can help the Pelicans rebounding woes against the Lakers, but how much else? Would those four minutes be better served going to Jaxson Hayes? No one can teach height but Hayes needs a little time to learn to use his. Could Frank Jackson defend Danny Green more effectively? Without a playoff series, there will be only one more chance to find out.

Gentry said a few weeks ago that the team needed to look for Williamson more, that four-minute spells without him touching the ball were unacceptable. Likewise, when Williamson is matched up against Alex Caruso alone on the low block the situation demands at least a quick look. Part of that is on Williamson, part of the blame lies with the coaching staff. The same goes for running plays with Favors on the perimeter and Melli on the bench. Great plays lose their effectiveness if ran with the wrong personnel.

There is still time to figure all of that out. A loss against the best team in the conference does not hurt the Pelicans’ playoff chances very much. It does show the flaws that need fixing. Just as Melli is still learning the American way of shooting one’s shot, Gentry is learning new things about a roster that is still missing key rotational pieces. Still, it was obvious this close loss to the Lakers was not a one-off performance.

This is the sustained success that Griffin was talking about, just before the actual success comes. Off-night games from teams without talent fighting for wins do not keep these games close this late in the season. The foundation, frame, and roof of a contender are in place. The championship touches will come soon. A title-winning small-market team to challenge the All-NBA duos in Los Angeles is not built in just one offseason.

Gentry knows one game does not tell the whole story, saying after the loss “Every loss is not going to be the end of the world, and every win is not going to be hallelujah. We’ve got bigger things we’re looking at. Our goal is to be playing our best basketball (by mid-April). Whatever that gets us, that’s what it gets us. We’re not worried about it either way.”

This most recent game was effectively over once Zion Williamson bounced the ball off his leg with two minutes left. New Orleans was just running out of time to make another surge to the lead. The Pelicans seemingly could not handle having the lead, though most of those runs to the front occurred with Lebron James on the bench. James had 40 points. Any claims to the throne from Anthony Davis or Williamson will have to wait.

The next matchup between these two teams will not. They play in New Orleans next Sunday. The Pelicans versus Lakers rivalry might be one-sided this season, but the balance of power will tilt as Williamson wises up to the game while James ages out of his prime. Getting to watch the matchup now is why New Orleans versus Los Angeles would be the most-watched first-round NBA Playoff series in years.

Now that the final regular-season road game against the Lakers is over, New Orleans has only three remaining road games against teams with a winning record. New Orleans welcomes only three more winning teams to the Smoothie King Center the rest of the season, this Sunday’s game against the Lakers included. The Pelicans proved they are prime-time worthy for at least one night in Hollywood. Now they have to sustain more than just silver-lining success against B-roll teams to make it to the big screen of the NBA Playoffs.

Review: ‘The Suicide Of Rachel Foster’ Is A Rollercoaster Ride That Plummets At The End

This Week In Credit Card News: Cards Give...

Tackling The Homelessness Crisis Through Business

2021 Cadillac Escalade Adds More Of Everything

13 Marketing Conferences To Check Out In 2020