Breaking
FIFA 21 Next-Gen Details Revealed For PS5 And...
Being Right At Being Wrong
Biden’s Stock Market Is Off To A Faster...
How To Avoid Social Media Misinformation Ahead Of...
The True Cost Of Losing An RFP
When Cause And Effect Converged With Humanity
Exxon Mobil Breaks Above 200-Day Moving Average –...
This Small Business Is Looking To Make America’s...
6 Questions To Practice Gratitude This Thanksgiving
Report: Facebook Tweaked News Feed After Election Day...
End The Month Strong With These Top Value...
From Maths Failure To Global Educator: How Knowledgehook...
What Will Customer Service Look Like In The...
‘Call Of Duty: Modern Warfare’ And ‘Warzone’ Season...
3 Lessons Startups Can Learn From Quibi’s Failure
You Aren’t An Imposter, No Matter What Your...
Home Business Zion Williamson Practices As Debate Rages About Whether He Should Redshirt Rookie Season
Business 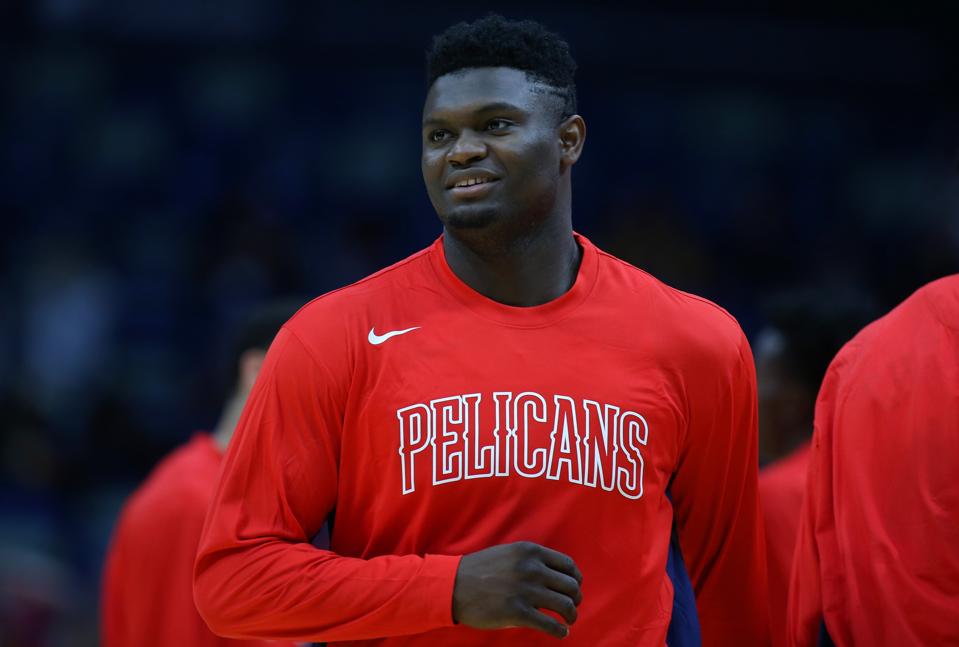 NEW ORLEANS, LOUISIANA – OCTOBER 11: Zion Williamson #1 of the New Orleans Pelicans reacts during a … [+] game against the Utah Jazz at the Smoothie King Center on October 11, 2019 in New Orleans, Louisiana. NOTE TO USER: User expressly acknowledges and agrees that, by downloading and or using this Photograph, user is consenting to the terms and conditions of the Getty Images License Agreement. (Photo by Jonathan Bachman/Getty Images)

Zion Williamson on Thursday completed his first full practice with the Pelicans since suffering a torn right meniscus in October.

The 6-foot-6, 280-pound Williamson is anxious to play — “If it was up to me, I would have been out there two weeks ago,” he told reporters — but a debate continues to rage over whether he should simply redshirt his rookie season.

Blake Griffin, Joel Embiid and Ben Simmons all sat out their rookie seasons due to injury. Both Griffin (2011) and Simmons (2018) went on to win Rookie of the Year honors in their first full seasons in the NBA, while Embiid finished third in 2017.

Just before the New Year, Shams Charania of Yahoo and The Athletic reported, “I’m told both sides are hopeful of a January season debut for Williamson.”

As of Thursday, the Pelicans (11-23) had won four games in a row and 5-of-6, and Charania reported that the team was hopeful it could challenge for a playoff spot in the loaded Western Conference.

Is it really worth it to bring their vulnerable franchise player back in what appears to be a lost season? Especially as concerns linger over his weight and overall conditioning. And he could be worth $1 billion when it’s all said and done.

This is the second season in a row in which Williamson has dealt with a knee injury.

At Duke, Williamson missed the final month of the regular season with a sprained right knee after blowing out his left shoe in a regular season game against North Carolina on Feb. 20.

He returned to help Duke beat Syracuse in the ACC Tournament quarterfinals, and then averaged 26 points as Duke advanced to the Elite Eight of the NCAA Tournament.

After being selected No. 1 overall by the Pelicans in the Draft, Williamson averaged 23.3 points and 6.5 rebounds while shooting 71.4 percent in four preseason games. He missed the final game against the Knicks and old teammate R.J. Barrett because of left knee soreness and underwent surgery Oct. 21, the day before the regular season started.

Duke coach Mike Krzyzewski told me in July that he thinks Williamson never should’ve played Summer League to begin with.

“No, I thought really he never should’ve played just because he’s been on this circuit of awards, the ESPYs, everything,” Krzyzewski told me at the Peach Jam. “I don’t think he’s in the playing shape or the mental shape to play.”

Now some NBA voices, including Stephen A. Smith and Paul Pierce, have called for Williamson to sit out the entire season and prepare for 2020-21.

Others have argued that if healthy, Williamson should play so the Pelicans can see how he jells with their young core players including Brandon Ingram and Lonzo Ball. If he doesn’t play at all, those voices argue, he will be behind the eight ball next season and that could lead to another lost season.

“I do want to get back out there but from a professional standpoint I do have to look at longevity,” Williamson told reporters.

Williamson suggested he would know when he’s ready and would discuss it with the Pelicans’ brass, David Griffin and Trajan Langdon, and the team’s medical staff.

“Just like when it came to my college decision, I woke up and i just knew,” he said. “I’ll probably have to wake up one day and go, ‘Griff, Trajan, training staff, I’m ready, let’s go.”